Grow Text SizeShrink Text Size
Coming In From the Cold 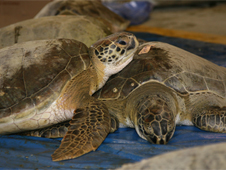 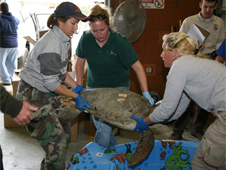 Law Enforcement Ranger Robert Romer was patrolling the Mosquito Lagoon on the night of Jan. 4 when some fishermen alerted him to a turtle on the shore.

"When you find one turtle, you know to start looking," said Romer, who patrols the Canaveral National Seashore for the National Parks Service. "I started walking the lagoon the next morning, and found two more."

Romer picked them up and called the Florida Fish and Wildlife Conservation Commission, which handles rescues and strandings. By the end of the next day, a full-fledged rescue operation was under way.

On the north end of the spaceport, a few miles away from Launch Complex 39, "The Shop" at the Merritt Island National Wildlife Refuge has been transformed from a garage to a sea-turtle rescue facility. Inside, dozens of federally protected turtles -- mostly green sea turtles, along with the occasional loggerhead -- are warming up in plastic pools and on tarps spread across the floor. Wildlife officers, ecologists, biologists and a team of volunteers work quickly to examine newly arriving turtles and move them indoors.

By the end of the day Jan. 10, about 400 turtles had passed through the facility; by Jan. 14, the number had increased to near 2,000. It's an unprecedented occurrence, and the scope of the rescue project has grown each day.

"You want to keep track of which turtle is which, and where it's going, so it can come back," explained Environmental Projects Manager Jane Provancha, a wildlife ecologist and with Innovative Health Applications at Kennedy. "We're focusing on trying to get animals through here."

That's where Karrie Minch, a wildlife technician with the Fish and Wildlife Commission, comes in. Several facilities are permitted for sea turtle rehabilitation, and Minch has the challenging task of lining up temporary homes for far more turtles than most of these groups are normally able to handle. Facilities as far away as the Florida Keys and Jekyll Island, Ga., have offered a helping hand.

"They've really gone above and beyond," Minch said of the array of aquariums, marine rehab centers and other organizations that have taken in turtles. "They've created extra pools with warm water. That's really what a lot of these turtles need -- a chance to warm up. Most don't need extra care or rehab for other injuries."

The animals in need are mostly juveniles. Adult sea turtles generally stay in the ocean.

Throughout the cold snap, turtles have been plucked from the water by wildlife workers, volunteers and even fishermen. John Hallberg and his five-year-old son stopped by the rescue facility Friday afternoon with five turtles they'd lifted into their boat. The pair had traveled to the Space Coast from Oviedo, Fla., north of Orlando, specifically to help with the rescue effort.

"We knew they were hurting," said Hallberg. "We collected these in 30 minutes and had to come in -- it was getting too cold."

Roz Grimm was one of several Fish and Wildlife Service volunteers who helped move and measure the animals when they were brought in.

"I was shocked when I got here and saw what this entails, the process of identifying each turtle," Grimm said as she surveyed a half-dozen turtles lounging on a nearby tarp. "But it feels wonderful to be able to help them. They've been so affected by these harsh conditions."

The turtles will be returned to the refuge and released back to the lagoon when the weather is consistently warmer.
Anna C. Heiney
NASA's John F. Kennedy Space Center
› Back To Top