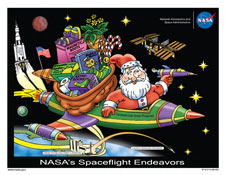 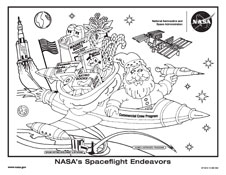 Preparations are under way at NASA's John F. Kennedy Space Center in Florida to support Santa Claus during his annual tour, delivering toys and other presents to children all over the world. Claus and his reindeer are annually invited to use Kennedy's Shuttle Landing Facility, nestled on a wildlife refuge, as a rest stop on Christmas Eve.

This year, Claus needs to be mindful about a change near the landing strip to help him avoid damage to his sleigh. An extraterrestrial-type landscape was constructed in July to provide prototype landers in NASA's Advanced Exploration Systems (AES) program with the kind of environment necessary for realistic testing, complete with rocks, craters and hazards to avoid. AES projects, some of which are designed to demonstrate new green propellant propulsion systems and autonomous landing technologies, are managed by NASA's Human Exploration and Operations Mission Directorate.

Claus may be interested in visiting Kennedy's Electrostatics and Surface Physics Laboratory to learn more about the electrodynamic dust shield technology under development to support future deep-space exploration.

"This technology works by creating an electric field that propagates out like the ripples on a pond," said Carlos Calle, lead scientist in the lab. "This could prevent dust accumulation on spacesuits, thermal radiators, solar panels, optical instruments and view ports for potential future Mars exploration activities."

Whether the technology could be used on a sleigh that kicks up dust as it lands on the rooftops of homes in desert regions is a possibility Claus may explore.

Claus also can visit Kennedy's Granular Mechanics and Regolith Operations Lab, if time permits. There, physicists John Lane and Phil Metzger made an unexpected advance in weather forecasting when they found that the laser and reflector under development to track lunar dust also could accurately determine the size of raindrops, something weather radar and other meteorological systems estimate, but don't measure.

The special quantity measured by the laser system is called the "second moment of the size distribution," which results in the average cross-section area of raindrops passing through the laser beam.

Accurate weather predictions are paramount to Claus' job performance on Christmas Eve and the happiness of children across the globe.

"We are developing new technologies to support potential missions to the moon, Mars, asteroids and beyond," Metzger said. "I'm sure they will work very well at the North Pole here on Earth too."

If Claus tours Kennedy's labs, his reindeer may be treated to some lettuce and radishes grown in Kennedy's Space Life Sciences Laboratory under red and blue LED lighting in one of NASA's Advanced AES Habitation Projects, increasing the food's antioxidant properties.

"Santa has started his countdown clock," Metzger said, "and NASA is working hard on new technologies to ensure that all systems will be 'go' for successful missions in the years to come."

Before his departure from the Space Coast, Claus also could learn about the modified Vehicle Assembly Building (VAB) which will be able to simultaneously process multiple rockets and spacecraft for NASA and commercial partners. Further evaluations are needed to determine whether the VAB can accommodate a sleigh as well.

As Claus and his entourage resume their deliveries, they may make a low pass over the Kennedy Space Center Visitor Complex to catch a glimpse of space shuttle Atlantis in its new exhibit hall, now under construction. Its grand opening is planned for summer 2013.

Perhaps Claus will return to the visitor complex after his work is done. The center will be open on Christmas Day, the first time in 45 years. As an international ensemble of astronauts celebrate the holidays 240 miles above on the International Space Station, guests can learn about the holiday traditions of each of the space station partner countries -- Belgium, Canada, Denmark, France, Germany, Italy, Japan, Netherlands, Norway, Russia, Spain, Sweden, Switzerland, the United Kingdom and the United States -- all countries that Claus has just visited.