Image above: Rocket University participants examine a fuel cell design as it goes through testing before being incorporated into an unmanned aerial vehicle. Photo credit: NASA/Rocket University
› Larger image 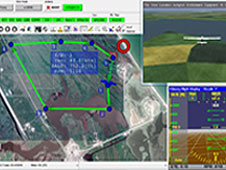 Image above: A simulation of the unmanned aerial vehicle shows its flight path around Kennedy and what the aircraft's instruments are expected to show. Photo credit: NASA/Rocket University
› Larger image

Image above: Participants in Rocket University conduct a test of the video system that will be used in the program's unmanned aerial vehicle project. Photo credit: NASA/Rocket University
› Larger image

Engineers at NASA's Kennedy Space Center in Florida continue to stretch their intellectual legs with projects outside their specialties. A team of participants in Rocket University is building a fuel cell-powered unmanned aerial vehicle and support systems to perform missions such as wildlife surveillance around the expansive space center.

"One of the goals is to get people exposure to some of the more contemporary technologies," said Michael Dupuis, who is leading the unmanned aerial systems group. Dupuis worked on the space shuttles' fuel cell systems, including the power reactant storage and distribution system, or PRSD.

The goal basically is to build a 9-foot-wide airplane with a narrow fuselage that can pilot itself over the iconic Kennedy landscape without jeopardizing landmarks such as the Vehicle Assembly Building and launch pads.

It will run on a fuel cell that uses hydrogen and collects oxygen from the air to produce electricity.

"It's still an electrical vehicle, but it has more endurance than battery-powered aircraft," Dupuis said.

The aircraft will carry a small camera and be able to capture precise images and statistics on the wildlife that live inside the 140,000-acre wildlife refuge at Kennedy. It is the same kind of information human observers collect from helicopters while counting creatures, such as manatees.

Apart from developing an aircraft, known as an Unmanned Aerial Vehicle, or UAV, the project also must account for all the things that go into operating it, planning its flights and collecting information from the mission. It is in this network, called the UAS, with "systems" replacing "vehicle," that Dupuis said real advances can be made in the project.

Consider, for example, that no unmanned vehicle has ever flown in Kennedy airspace. All the aircraft have had pilots in the cockpit. So getting Kennedy managers used to the idea of unmanned aircraft buzzing around the area has taken some work.

"Just the fact that a UAS went through the process to be certified to execute a mission out here and to go execute that mission, that's going to be new ground for Kennedy," Dupuis said. "I've gained an enormous respect for program and project management. I'm getting an absolutely world-class education in systems development and technical project management."

The adjustment is more than academic since Kennedy is going to play a larger role in the future in certifying rockets and spacecraft for flight as the spaceflight business expands into non-traditional areas.

"One of the goals is to get people exposure to the certification of flight hardware," Dupuis said. "It's coming here but hasn't traditionally resided here in the past."

Rocket University is far from simply presenting technical challenges to overcome. It is as much about learning how to move a team of engineers through a series of steps, including peer reviews to complete a mission using NASA practices that have governed scores of missions.

That doesn't mean the task is a grind through bureaucratic checklists, participants said. In fact, they said it's a lot of fun.

"I'm proud and encouraged by what this team has produced, what these individuals have produced for the project," Dupuis said. "These are world-class technical minds, but I know that a lot of what they're doing is outside their comfort zone and they are consistently rising to the occasion."

Beyond the challenges of building an aircraft and letting it fly on its own, the Rocket University participants routinely turn their education into inspiration. Engineers visit classrooms to show middle and high school students the delight of learning then using math and science to build cool things and make them do things that haven't been done before.

"The earlier you can get somebody excited about science, technology, engineering and math (STEM education), the better," Dupuis said. "We're developing mini-labs we can take into primary and secondary schools to try and ignite that spark of interest even earlier."