Legendary Rocket Pioneer Visits Kennedy
America's Vision for Space Exploration sees NASA's astronauts returning to the moon, then traveling to Mars and beyond. But more than 70 years ago, Konrad Dannenberg heard about going to Mars even before the first working rocket was built. 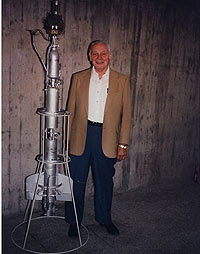 This started a lifelong dedication to develop a vehicle that would allow mankind to travel to the red planet. The technology of his designs would ultimately become the basis for the propulsion system for NASA's space shuttle and later play a role in the development of the next-generation spacecraft that will travel to Mars and beyond.

"Of course, I was a Mars man right from the beginning," said Dannenberg.

Born in 1912 in Weissenfels, Germany, Dannenberg moved with his family to Hannover, Germany, where he earned his Master of Science degree in mechanical engineering from the Hannover Technical University.

Inspired by Austrian amateur rocketeer Max Valier, who advocated the use of rockets for space flight, and automobile engineer Fritz Von Opel, who built the world's first rocket-powered automobile engine in 1928, Dannenberg and his colleagues began building their own rockets.

Drafted by the German Army in the 1930s as a horseman, Dannenberg was eventually released from military duty because he was deemed unsuitable to ride horses. "I was not really qualified, being a technical engineer, to be in a horse drawn company," said Dannenberg amusingly.

Because of his engineering background, Dannenberg was chosen to work at Peenemünde, which would become Germany's premier rocket development and test site. 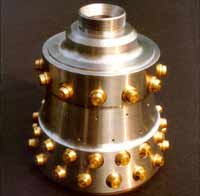 His first job there was studying the injection system of rocket motors. In those days, igniting rocket engines posed a big problem because most blew up at the time of ignition. Dannenberg became a specialist and ultimately designed the mixing nozzles of a working combustion chamber.

Image right: Dannenberg designed the multiple mixing nozzles in the sample shown. This is one of 18 units that was part of a rocket engine combusion chamber. Photo credit: Courtesy of Konrad Dannenberg
+ View High-res Image

Dannenberg worked alongside some of the rocketry greats like Wernher von Braun and Kurt Debus. In the closing days of World War II, Dannenberg was one of over one hundred engineers from Peenemünde chosen to travel to the U.S. to work on the American rocket program under the project name of "Operation Paperclip."

In January of 1947, Dannenberg and the other rocket engineers worked tirelessly at Fort Bliss, Texas, designing, building and testing rocketry systems. The test launches took place at the White Sands Proving Ground in New Mexico. Two of the last missiles were taken to Florida, where they were launched from an area now known as Cape Canaveral.

The Army relocated Dannenberg and a group of scientists to the Redstone Arsenal in Alabama, where they designed and developed the first large U.S. ballistic missile, the Redstone.

The Redstone rocket with a booster stage launched Explorer, the first U.S. satellite. It also launched the first manned missions with astronauts Alan Shepard and Gus Grissom into space.

By 1960, Dannenberg was transferred to NASA's Marshall Space Flight Center in Huntsville as deputy manager of the Saturn program. With President John F. Kennedy's pronouncement in 1961 to land a man on the moon before the end of the decade, Dannenberg developed the largest rocket ever built. He was ultimately awarded NASA's Exceptional Service Medal for his contributions.

Dannenberg retired from Marshall Space Flight Center in 1973 as deputy director of the Program Development Mission and Payload Planning Office and as International Space Station program manager for the then-fledgling project.

Dannenberg now serves as a consultant to the Alabama Space and Rocket Center in Huntsville. He is recognized for his contribution in the advancement of America's space program and has been honored by his co-workers and important organizations throughout the industry.