Grow Text SizeShrink Text Size
NASA Remembers its Fallen Heroes
On the eve of the 25th anniversary of the space shuttle Challenger accident, Kennedy Space Center observed NASA's Day of Remembrance, Jan. 27, with a wreath-laying ceremony at the KSC Visitor Complex Space Mirror Memorial. The Day of Remembrance honors members of the NASA family who lost their lives while furthering the cause of exploration and discovery, including the astronaut crews of Apollo 1 and shuttles Challenger and Columbia.

A statement issued by President Barack Obama read in part, "Today, on this Day of Remembrance when NASA reflects on the mighty sacrifices made to push those frontiers, America's space agency is working to achieve even greater goals. Through triumph and tragedy, each of us has benefited from their courage and devotion, and we honor their memory by dedicating ourselves to a better tomorrow. Despite the challenges before us today, let us commit ourselves and continue their valiant journey toward a more vibrant and secure future." 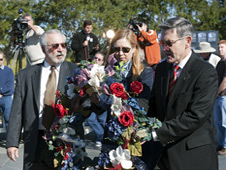 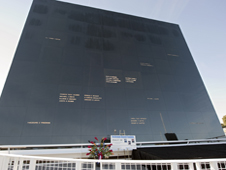 Image above: Flowers lay at the foot of the Space Mirror Memorial at the Kennedy Space Center Visitor Complex in Florida for NASA's Day of Remembrance to honor members of the NASA family who lost their lives while furthering the cause of exploration and discovery. Photo credit: NASA/Kim Shiflett
› Larger image 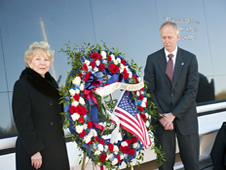 Before a wreath-laying ceremony at Arlington National Cemetery, NASA Administrator Charlie Bolden also issued a statement that read in part, "The legacy of those who have perished is present every day in our work and inspires generations of new space explorers. Every day, with each new challenge we overcome and every discovery we make, we honor these remarkable men and women. Please join me in working to fulfill their dreams for the future."

On Jan. 28, The Astronauts Memorial Foundation's remembrance service at the Space Mirror Memorial was attended by NASA officials, dignitaries, families of the fallen, Kennedy workers and the general public.

Scobee Rodgers said, "We're not a nation of naysayers, we're a nation of believers. We're innovators and problem solvers. We're risk-takers with a pioneering spirit. We as a nation are indebted to the space pioneers who blazed a trail of exploration and discovery."

She and the families of the lost Challenger crew came together and created the Challenger Center as a living tribute to their loved ones. Scobee Rodgers said their vision became a reality with the first one in Houston. There are now 48 Challenger Centers throughout the U.S., and also in Canada, England and South Korea.

"It's time for the next 25 years to unfold," Scobee Rodgers said.

McCulley read a portion of the Gettysburg Address, ending with the words, "that we here shall highly resolve that these dead shall not have died in vain."

Cabana said, "We learned many lessons from the loss of Challenger. And the vehicle that returned to flight two-and-a-half years later may have looked the same, but had hundreds of changes to make it safer and more reliable."

Soria, the Alan Shepard Technology in Education Award winner said, "It is fitting to pause and challenge each other to become more involved in science, technology, engineering and mathematics (STEM) education of our students. The future beckons."

It's not easy to look back and reflect," Gerstenmaier said. "We learned that little things that seem harmless can become catastrophic events. The human spaceflight team has learned tremendous lessons from these events.

"We seek to answer the most difficult questions imaginable and formulate new questions," Gerstenmaier said. "Rededicate yourselves to expanding the frontier of knowledge in a manner that is fitting of the huge sacrifice made by those who have gone before."

"We will continue to strive to be better. To explore, to expand our knowledge of our universe and to reach beyond," Cabana said.

At the conclusion of the memorial, Scobee Rodgers and Gerstenmaier placed a wreath below the names of the Challenger crew.

The event was open to the general public and the visitor complex provided flowers for attendees to place at the memorial throughout the day.

The Apollo 1 tragedy occurred at Launch Pad 34, Jan. 27, 1967, during a preflight test. Astronauts Virgil "Gus" Grissom, Edward White and Roger Chaffee lost their lives when a fire swept through the command module.

Space shuttle Challenger's STS-51L mission ended in tragedy during ascent after lifting off from Launch Pad 39B on Jan. 28, 1986. A faulty O-ring on one of the solid rocket boosters caused a chain of events that resulted in an explosion and the loss of Challenger and its seven crew members. Commander Scobee, Pilot Michael J. Smith, Mission Specialists Judith A. Resnik, Ellison S. Onizuka, and Ronald E. McNair, and Payload Specialists Gregory B. Jarvis and Sharon Christa McAuliffe perished in the accident.