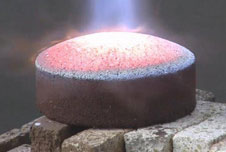 Image above: A 2-inch by 4-inch brick is heated by a welding torch in a test of a concept for making heat shields from the soil of other worlds. Photo credit: NASA
› Larger image 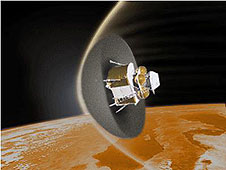 Image above: An artist's concept of a spacecraft using a heat shield made from the soil of another world, called regolith. Photo credit: NASA
› Larger image 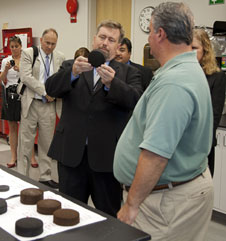 
An important test is coming up next week to see whether a heat shield made from the soil of the moon, Mars or an asteroid will stand up to the searing demands of a plunge through Earth's atmosphere.

At stake is the possibility that future spacecraft could leave Earth without carrying a heavy heat shield and instead make one on the surface of another world and ride it home safely. The weight savings opens new possibilities ranging from using smaller rockets to carrying many more supplies on an exploration mission.

Michael Hogue, a researcher at NASA's Kennedy Space Center in Florida, came up with the idea during a brainstorming session last year covering different ways to use extraterrestrial soils, known as regolith.

"Others were talking about how regolith can be used to make bricks or landing pads and I said, 'Well, if it's good for that, why can't it be used to make atmospheric entry heat shields?' " Hogue said.

Since then, a team of engineers has been trying out various mixtures and techniques to find out whether the idea has any potential. So far, the tests have been very successful, with small bricks of material standing up well to the intense heat of a blowtorch. A sensor placed behind the brick recorded temperatures of about 200 degrees F compared to the approximately 4000 degrees F the front side endured.

"I expected some to fail," Hogue said. "There is an optimum range of density you need to hit for each material where it's light enough to have low enough thermal conductivity, but also structurally strong enough to survive the forces of atmospheric entry. All of our formulations that we tested with a cutting torch at least passed that."

The dome-shaped bricks, each 2 inches thick and 4 inches in diameter and made of different combinations of material, will face their toughest test next week when they are placed inside the arc jet facility at NASA's Ames Research Center in California. There, they will be subjected to a scorching plasma stream that will put the bricks through heating conditions similar to those seen during entry.

"That will ultimately determine whether this idea is feasible or not," Hogue said.

The concept, while promising, is far from becoming operational. At this point, Hogue puts the concept at a TRL, or technology readiness level, of 1 on a scale of 9, with 9 being an operational element. Working it up the TRL scale will take a series of evaluations, adaptations and inventions, including potentially trying out a sample disc on the bottom of a cargo spacecraft returning from the International Space Station.

Hogue said his attitude has gone "from guarded skepticism to hopeful enthusiasm" on the effort.

The potential weight-savings is too great to ignore, Hogue said.

Making the heat shield in space would likely be the work of a robotic device, or at least a heavily automated system to either mix the regolith with a rubbery substance in a mold or heat a large disc of regolith until the soil elements fuse together. The heat shield could then be cut and shaped as needed.

The primary advantage is that getting the finished heat shield off an asteroid or Martian moon would take very little force because the gravity is so low. The heat shield could be as big as anyone would want. It could be used to insulate a spacecraft whether it is going to the Martian surface or back to Earth.

The weight savings is critical to the plan because the regolith material is anything but light. A brick of regolith, actually made from Mars and moon soil simulant instead of actual extraterrestrial dirt, feels the same in the hand as a brick one builds a house from on Earth.

Also, the heat shield would not be reusable, but would be designed to have some layers fleck or burn off, a process called ablating. All heat shields except the space shuttles' were made of ablative material.

"You can make it massive and if it heats up and ablates off, all the better because the ablated mass takes heat with it," Hogue said. "After about five minutes you jettison the shield over water and you're done."