Grow Text SizeShrink Text Size
Evolution of Launch Pad 39A Ever-changing
As Labor Day arrived in 1965, the hard work to construct Launch Complex 39's Pad A was complete, and the pad was ready to be turned over to NASA. 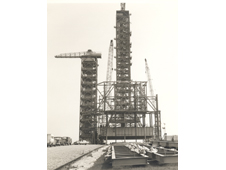 Image: Looking like a giant erector set, is the construction of the payload changeout room for the Space Shuttle Program at Launch Pad 39A. It allows the capability of loading the shuttle vertically, and making installation or removal of payloads at the launch pad possible. Photo credit: NASA file/1977
› Larger image 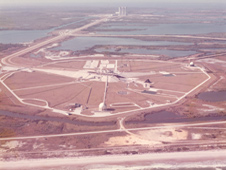 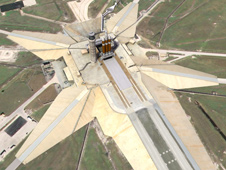 
Designed to launch the Apollo Program's Saturn V rocket, Pad A was the first of two planned pads in the complex to be completed. Construction began in November 1963. The prime contractor was a joint venture of Blount Brothers Construction Corp. and M. M. Sundt Construction Co.

NASA alum Harry May was Launch Complex 39's project engineer during the pad's creation. "Pad A was completed on time and within budget, a testimony to the experienced engineers on the NASA team who managed the project," May said. "It was very rewarding to be a member of that exceptional team."

The pad is at the eastern end of Complex 39, a quarter of a mile from the Atlantic Ocean. A total of 120,000 cubic yards of concrete and 8,000 tons of reinforced steel were used in its construction.

Observed from a distance, the pad was virtually flat. A two-story concrete building, housing environmental control system and pad terminal connection equipment, and a high pressure gas storage facility were built under the east and west sides of a hardstand, dissected by a flame trench. A mobile flame deflector awaited service during launches on the north pad perimeter.

Beneath the hardstand was the blast room, known as the "rubber room," the final destination along the Apollo astronauts' emergency escape route. A 200-foot-long chute led into the dome-shaped room, which had a floating concrete floor built on a spring suspension system.

No towers were installed on the pad's surface. Rather, the Saturn V was supported by a launch umbilical tower (LUT) secured atop a mobile launcher, and a mobile service structure.

Following the conclusion of the Apollo Program, Pad 39A was modified to support NASA's new crew transport vehicle, the space shuttle.

The upper portion of the LUT was removed from the launch platform and permanently installed on the pad's hardstand to become the fixed service structure (FSS). The blast room was retired in favor of a slidewire basket system, designed to whisk its passengers away from danger to an above-ground bunker on the pad's perimeter.

A rotating service structure, adjoining the FSS, included a payload changeout room to provide environmentally controlled conditions for inserting vertically handled payloads in the shuttle's payload bay, and protection of the shuttle from the elements.

An Apollo-era hammerhead crane, a recognizable feature at the top of the FSS in early shuttle launch photos, was removed from Pad A in December 1994 when it became more cost-effective to use a mobile crane than to maintain the hammerhead crane, experiencing the corrosive effects of the sea air.

NASA engineer Scott Colloredo, chief architect for 21st Century Space Launch Complex Program planning at Kennedy, is confident that the pad will be used for years to come. "Pad 39A is destined to play a role in NASA's future," he predicted, "and will be reconfigured, once again, to support a number of heavy-lift, commercial crew or other launch vehicles."