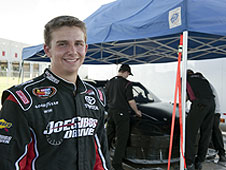 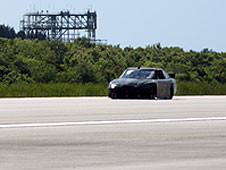 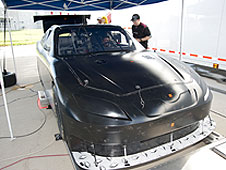 Image above: The NASCAR test vehicle is prepared for another test run beneath a tent set up on the ramp at the Shuttle Landing Facility. Photo credit: NASA/Kim Shiflett
View Hi-res Image 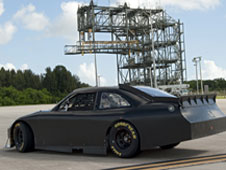 Image above: NASCAR driver Matt DiBenedetto crosses in front of the Mate-Demate Device at the Shuttle Landing Facility as he drives out to the runway. The MDD, as it known at Kennedy, lifts the shuttle off the top of NASA's Shuttle Carrier Aircraft, a modified 747. Photo credit: NASA/Kim Shiflett
View Hi-res Image

Driving the same kind of car used at American superspeedways, DiBenedetto streaked down the runway at 205 mph, just shy of the space shuttle's touchdown speed. He shifted to neutral until the car touched 150 mph before revving up again.

"I never thought I'd get lucky enough to come out and use the Kennedy Space Center runway," he said. "I never really thought about it, but after coming here it's obviously working out really great for us."

While DiBenedetto drove the instrument-laden Toyota up and down the three-mile-long runway a few dozen times, a cadre of engineers set up on the facility's ramp looked over the data on laptop computers. The work was part of Joe Gibbs Racing's testing program that looks for ways to improve a stock car design.

"Really, the sport has gotten so competitive that a couple tenths of a percent in downforce can make a huge difference on the track and that can be the difference between an eighth or tenth place car and a top-three car," said Dan Olson, an aerodynamic engineer for Joe Gibbs Racing.

If the goal had been to see how fast the car would go, he could have reached about 237 mph, the driver said. Instead, the testing, as precise and disciplined as NASA's own regimens, was focused on the aerodynamics of the car during the coast-down phase from 205 to 150.

"There's a lot of different tasks that we're doing, not specifically going for all speed," DiBenedetto said. "We do a bunch of different stuff out here."

This was the first time the Joe Gibbs operation came to Kennedy for testing, although other teams have evaluated high-performance cars on the runway. The partnership was set up by Kennedy's Center Planning and Development Office, which finds business development uses for the spaceport's unique assets.

"This facility is fantastic because there are so many different, interesting things and talking to engineers who stop by and other NASA technicians," said Olson, who also is a private pilot. "I'd love to see a space shuttle land out here."

"Coming out on the runway for the first time, it was neat, it was just so large and there's so much room you about feel lost on it," DiBenedetto said.

The team tests in several places in the U.S., including Toyota's proving ground in Arizona and in wind tunnels. But the Shuttle Landing Facility offers an exceptionally flat expanse that allows the engineers to push the boundaries to find out what the car can do.

For example, the air dam on the front of the car could be lowered until it was all but touching the concrete on the runway, something not possible in a wind tunnel. Wind tunnels also are expensive, Olson said, costing about $4,000 an hour.

"When we come here, they throw a lot of data and software on the car and hopefully we can learn something new because with the sport nowadays, if you can find the tiniest little edge, it could be huge," DiBenedetto said.