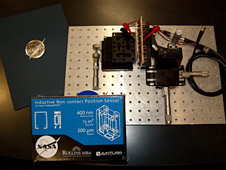 Image above: The original breadboard prototype developed by Robert Youngquist is pictured with the prototype kit developed by the Rollins MBA team. The kit will be sent to potential licensees as part of the commercialization plan. Photo credit: NASA/John Hampton
› View Larger Image

NASA's Kennedy Space Center in Florida is getting help transferring innovative space technologies to the marketplace, thanks to a new partnership between NASA and Rollins College in Winter Park, Fla.

Under a new Space Act Agreement, a small team of MBA students and faculty advisors from the school's Center for Advanced Entrepreneurship will thoroughly analyze a patented NASA technology, then provide NASA's Technology Transfer Office at Kennedy with recommendations for potential licensees and marketing strategies, as well as insight gathered from industry experts.

"These 'second-tier technologies' are patented and they have merit, but it's hard to aggressively market them with so many technologies ahead of them in the queue," explained Jeff Kohler of QinetiQ NA, who leads a team supporting NASA's technology transfer activities at Kennedy. Through the new partnership, "NASA gets the benefit of an extra boost for some technologies we could only passively market, and the students get the experience of working with real-world technologies."

When NASA contacted the school to explore the possibility of such a partnership, the concept sounded promising to Cari Coats, executive director of Rollins' Center for Advanced Entrepreneurship at the Crummer Graduate School of Business. She believed a model the school was applying in another partnership also would work well for collaboration with Kennedy.

The partnership kicked off in September with a pilot project in which the Rollins team evaluated and created a commercialization plan for the inductive position sensor developed by NASA's Robert Youngquist and Stephen Simmons of Easi. The technology is a series of three small inductors that align in such a way that any slight movement by the middle inductor is detected because of the change in magnetic fields. This information can be fed electronically to a device that needs precise alignment in order to make corrections.

Although the sensor was developed to support measuring the depths of very small defects on the space shuttle orbiter windows, it could be beneficial anywhere volume is tight but high sensitivity is needed over a range of positions, including medical, optical, machining and automotive uses.

The Rollins team comprises professor Dr. Peter McAlindon, advisor Sergie Albino, and four student participants, all of whom brought previous technical or business experience to the project. Two of the students, Carlos Capiro and Pankaj Patil, work with major defense contractors and have engineering backgrounds; the other two, Jason Goldberg and Steven Madow, came into the project with extensive business experience, one in information technology and the other in Web development.

Throughout the project, the team followed a process established at the start of the term.

"We call our process the 'Four Ps'," McAlindon explained. "It stands for patents, partners, prospects and packaging."

The group started by researching the patent in order to determine what set the new sensor apart from existing sensors. It then reached out to industry partners.

"First, we really had to understand how this technology fits with all the other technologies out there," McAlindon said. "Then we called people in the field who know all about sensors, to help us identify holes in the market and where this technology can be applied."

These subject-matter experts helped narrow a list of "prospects" -- specific markets and individuals to target for possible commercialization opportunities. Finally, the team considered packaging -- the best way to get a prototype of the technology into the hands of companies who potentially could license it.

"If you can show someone the technology, it works a lot better than sharing papers or formulas," McAlindon said. "They all want technical specifications and ask to actually see a sensor. So the students took a prototype and built a custom housing, and made it so you can attach it to whatever you're working on and see how it performs."

The Rollins MBA team presented its commercialization plan to NASA at the school's Winter Park, Fla. campus Dec. 6, at the close of the fall term.

"The students more than exceeded our expectations in the development of a commercialization and marketing plan for the non-contact position sensor," Kohler said after the presentation. "They went beyond the traditional scope of a plan and developed a business model for a possible start-up company."

And the students' enthusiasm was reflected in the finished product.

"The presentation and professionalism shown by the students was outstanding. They were genuinely excited about the project and even offered to continue working on it into the next school semester," said NASA Licensing Manager Jim Nichols.

Kennedy's Innovative Partnerships Office will use these results to pursue opportunities with industry. Typically the agency licenses the patent to a company that develops it into a saleable product. Royalties NASA earns through these sales are used toward further technology development.

With the trial successfully completed, the non-reimbursable Space Act Agreement will be signed in time for the start of the spring term in January, with the Rollins team working on one new technology per term during two of the three terms per year. Although it's written as a three-year agreement, it could be extended if the partnership continues to thrive.

"These students were just giddy at the opportunity," Coats said. "The idea that they could have a role in bringing to market a NASA technology -- a brand that carries significant weight -- is very exciting. We're thrilled to get them out of the classroom and provide a real-world opportunity."
Anna Heiney
NASA's John F. Kennedy Space Center
› Back To Top