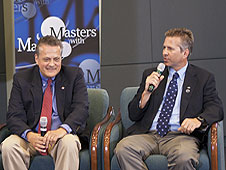 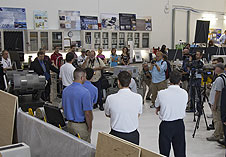 Image above: The Swamp Works lab at Kennedy has large open areas to encourage engineers to work together informally and to help spur creativity. Photo credit: NASA/
› View Larger Image
Failure is not just an option for researchers, it's an expectation that's fundamentally tied to ultimate success. That’s what two of the men behind the Swamp Works laboratory at NASA's Kennedy Space Center in Florida told colleagues taking part in a series of interviews with some of the people who are moving the center into the future.

The lab's motto, "fail fast forward," sounds unusual for a technical agency, but that's the point, Mueller said. After decades of methodically handling small issues and moving slowly, NASA wants to take on the problems that come with deep space exploration and use creative ways to tackle them.

"We're not looking for incremental advances, we're looking for quantum leaps, but that involves more risk," Mueller said. "They are asking us to be more agile, more nimble. We're doing things the way we used to do them in the Apollo days. (We do) a lot of rapid prototyping, a lot of experimentation, creativity. We are pushing more on technology development."

Swamp Works is based inside a building behind the Space Station Processing Facility. Apollo astronauts used the facility to rehearse walking on the moon and setting up experiments.

The concept of a small engineering lab built to resolve problems quickly goes back in aerospace terms to Lockheed Martin's Skunk Works run by legendary designers Ben Rich and Kelly Johnson. That facility turned out some of the most noteworthy aircraft designs of their era, including the U-2 and SR-71 spy planes, and the F-117 stealth fighter.

Kennedy's team chose "Swamp Works" because of the Florida connection.

Jack Fox, chief of the Surface Systems Office at Kennedy, said the center has so much engineering expertise that establishing a lab to take advantage of it and use it in a different way was a comfortable fit.

"The starting point is that Kennedy has a long history of innovation and engineering technology in solving shuttle problems and payload problems," Fox said. "The easy part was we had a pretty good starting point right off the bat. They wanted a lean development operation, a skunk works."

Ed Hoffman, NASA's chief knowledge officer and the host of "Masters with Masters," said touring the Kennedy laboratory with its collaborative teams and open spaces energized him.

"The first thing that hit me was the energy," Hoffman said. "People were engaged. It was the passion of doing a difficult thing."

The facility was left open on purpose, the men said, to follow the Silicon Valley model and encourage creativity.

"It's a large area where there are no walls, no cubicles," Mueller said of the innovation space. "We have lots of whiteboards everywhere and we encourage people to interact informally."

Both Fox and Mueller are veterans of the Space Shuttle Program, where Fox worked on auxiliary power units and Mueller joined after the Challenger accident to work in solid rocket booster processing. Both worked in many other areas of the shuttle program, too, during their careers before beginning the Swamp Works project.

"I learned in shuttle to question everything, analyze everything, test everything because space is very unforgiving and you can't just pull off the side of the road," Fox said.

The teams working in the Swamp Works have numerous experiments under way and are working up several concepts that could become operational one day. The robotic miner called RASSOR is one example. Short for Regolith Advanced Surface Systems Operations Robot, RASSOR is in its early prototype stages, but engineers are methodically solving problems for it on Earth with an eye to seeing it go to work in space.

"We felt we needed a new way to do things and that's Swamp Works," Mueller said.