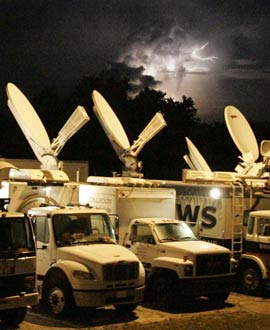 But the same warm, moist climate that creates this tropical paradise also lends itself to thunderstorms -- and potentially deadly lightning.

Image right: Lightning streaks across the sky above satellite trucks at NASA Kennedy Space Center's Shuttle Landing Facility on Aug. 9, 2005. News media had gathered for the landing of Space Shuttle Discovery, returning from mission STS-114, but the landing was eventually deferred to Edwards Air Force Base in California due to weather concerns. Photo credit: NASA

But despite the ever-present threat, a new tool -- based on previous Kennedy Space Center technology -- is expected to keep the spaceport's unique personnel, hardware and facilities safer than ever.

It's called the 4DLSS, which stands for Four-Dimensional Lightning Surveillance System. The innovative system combines the best of two complementary weather-monitoring technologies to give meteorologists the total picture of lightning activity across the launch center and surrounding counties.

"That's important not just for safety, but also resource protection," notes William Roeder, a meteorologist with the U.S. Air Force 45th Weather Squadron, which monitors conditions at the spaceport. "Not only is it going to help us issue lightning advisories to improve safety, but it's also going to help protect our payloads and rockets better."

One component of the new system relies on the technology of Lightning Detection and Ranging, or LDAR. Originally developed by NASA-Kennedy as a lightning research tool, the system proved so effective the agency decided to use it for daily operations, as well. However, since the LDAR primarily was designed for research instead of daily use, its outdated design makes it difficult and expensive to maintain.

In the late 1990s, NASA transferred the technology to Global Atmospherics Inc. (now Vaisala Inc.), which improved and refined the system for worldwide, commercial use. The resulting technology, LDAR II, uses commercial off-the-shelf components and better engineering software to provide a cheaper, more reliable system that experts believe will be every bit as effective as the original. 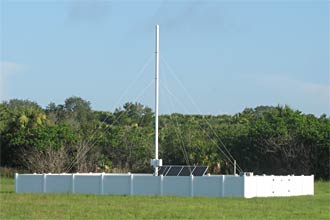 Nine antennae are strategically placed throughout the spaceport and surrounding counties. Stronger and more compact than the original seven-antenna network, the new sensors provide up to 10,000 time-stamped lightning reports per second, in three dimensions.

Image left: The LDAR II system includes a network of upgraded antennae, like the one pictured at left. Nine such antennae are located throughout the spaceport and surrounding area. Photo credit: SLRSC, Systems Div., ITT

While the LDAR II system is very effective at picking up on all the "arcs and sparks" in stormy skies and tracking lightning as it traces downward, there is one drawback: It can't see up to 1,000 feet above the ground. This means the system won't detect the actual ground strike. Only about 30 percent of lightning is of the cloud-to-ground variety -- the remaining 70 percent remain in the clouds -- but that's still nearly a third of the total lightning picture.

"When you put the data together, you get a total picture of the lightning activity," Roeder says. "In fact, we already do that graphically. We take the CGLSS data and overlay it on top of the LDAR data. By putting the CGLSS mark on it, we can confirm that the lightning went to the ground." 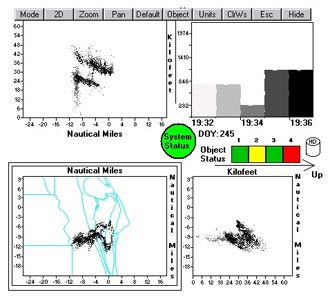 The tiny dots displayed on the LDAR screen reveal a 3D view of lightning activity in and around Kennedy Space Center. A lightning strike can generate a few to several hundred dots -- which represent "arcs and sparks" in the sky. The top left panel shows lightning as viewed from the south: In the image at right, the lightning slopes downward from the west to the east and is divided into two layers reaching above 42,000 feet. Lightning activity is viewed from above in the lower left panel, and from the east in the lower right panel.

The panel at upper right shows the time history -- specifically, how many dots were recorded each minute for the past five minutes. A green "system status" indicates the system is functioning properly, the object status reflects the amount of activity in specific watch and warning areas, and the HD icon tells operators whether the computer's hard drive is being subjected to heavy loads.

Data from both systems feeds into a new, faster computer processor that can quickly sort through the information streaming in from the antenna network. Unlike the original processor, the new one also accommodates antennae that vary in height. Another advantage of the upgraded processor is its ability to detect and display not only the first return stroke of a cloud-to-ground lightning flash, but subsequent return strokes, as well. Separated by tenths of a second -- right at the limit of what the human eye can see -- subsequent return strokes can strike the ground two miles or more from the original strike location.

The Four-Dimensional Lightning Surveillance System is installed, but can't be tested until real-world lightning unleashes its fury over the launch center. Data from the new system will be compared to that supplied by the original LDAR to verify its performance. The 4DLSS is expected to be up and running by June 30.

Joe Pallay, an employee of ITT's Systems Division out of Colorado Springs, is the project team leader for the 4DLSS. Asked when testing will begin, he answers with a laugh, "Well, can you tell me when Mother Nature is going to give me some lightning?"

Here in Lightning Alley, he probably won't have to wait long.