While the crowded room enjoyed lunch, local musician Chris Kahl sang "Rocket Boys," a song he wrote for the honorees. The song can be found on his CD "Orange Blossom Memories."

Chairman of the Board Adrian Lafitte of Lockheed Martin praised the award recipients. "We're here to celebrate three individuals that have dedicated and been an advocate most of their lifetimes to the space program," he said. 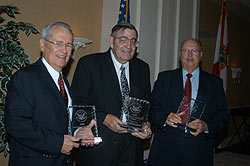 Beddingfield retired from NASA in 1985 after a 26-year career with the nation's space agency. He joined NASA at the insistence of Gus Grissom and came to Florida in 1959 to help guide Project Mercury. He was among the first to work on the space shuttle at Kennedy Space Center in Florida and left the program as deputy director of shuttle operations. He continues to be involved in space history initiatives and resides in Titusville, Fla.

Beddingfield shared that he was one of just 33 employees at the spaceport; when employees were assigned numbers, he was number four. "I had worked through 23 launches and decided enough was enough," he said about his decision to end his exciting career.

Shill worked as a contractor on the Eastern Range for more than 40 years and retired in 2004 as director of the Range Technical Services Contract for the U.S. Air Force 45th Space Wing. A former National Space Club Florida Committee board chairman, he resides on Merritt Island, Fla.

Shill said his favorite moments were working on the Range as opposed to the management side, and that it was much easier during his early career because the many programs had adequate funding.

"The belief in the ability to get the job done if you try hard hasn't changed in 35 years," he added. "I can't think of a better calling to spend the past four-plus decades of my life."

Thirty-nine years of experience allowed veteran aerospace manager Webb to work on every U.S. manned space program. Webb retired in 1998 as director of support operations and systems management for United Space Alliance. The local chapter of the American Society of Mechanical Engineers named its top annual award for Webb, who resides on Merritt Island.

Webb said he loved getting up in the morning for work and making the long drive from Satellite Beach, Fla., because he could think about what he planned to accomplish for the day. He also enjoyed the teamwork, but said he valued his home team most.

"There's nothing more interesting or more worthwhile to work on," he shared.

Each year, the committee recognizes one to three people for lifelong achievements and contributions to the U.S. space program. Nominees come from government, military, commercial or government contractor organizations. They may be retired or currently employed in continuous service for a substantial period.