"Everything in that facility is put together to make the employees comfortable and make them more efficient," said Frank Kline, a NASA Construction of Facilities project manager.

It's not just the finished product that will glisten a shade of green when it opens for business in December. Since August 2009, the team has been working to keep the construction site just as eco-friendly.

"We've recycled 475 tons of concrete, 163 pounds of crushed bottles and aluminum cans, 2.16 tons of cardboard, 164 pounds of white paper, 2.3 tons of wood and 3.5 tons of steel," said Project Manager Jim Peacock of HW Davis Construction. "These numbers will just increase until the project is completed." 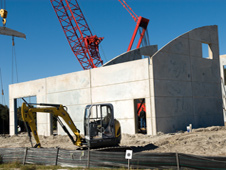 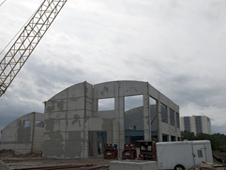 Michelle Ramsey, an environmental engineer with Innovative Heath Applications, said she even has taken part in a little dumpster diving to retrieve recyclable materials. While it may not be glamorous, she says it's important. She said another aspect of her job is to make sure materials are reused on center.

"Even the silt fencing," Ramsey said. "We have our girls come over and they remove the silt fence and use it for protection of burrows and stakes for burrows for the gopher tortoises."

The team is reaching for the U.S. Green Building Council's Leadership in Environmental and Energy Design, or LEED, Platinum status, which isn't easy to achieve. LEED uses a point system, and then awards those points based on the project's design and implementation.

"We are rock-solid getting that Platinum. I think we're way over 52 points, which is the minimum," Maurice Amozig, project manager for Jones Edmunds and Associates, said. "It looks good. It looks very good to be solid Platinum."

Everyone is on the lookout for ways to improve the score. Larry Hersey of URS, the project's inspector, for example, suggested that the electrical contractor use energy-efficient bulbs as temporary lighting, instead of incandescent, a suggestion that was quickly implemented.

For each member of the team, this is the first time they are going for the platinum rating.

"No doubt about it, it's our No. 1 goal," said HW Davis' Doni Denning, the safety coordinator.

Project Superintendent Aaron Peacher agrees. He said the crew is following LEED's strict guidelines of obtaining all materials from within a 500-mile radius. He also said of all the construction waste material generated, about 95 percent has been diverted from the Kennedy landfill. These diverted materials are either processed directly on Kennedy for reuse or sent off to local recyclers for processing.

The green vision began well before the design process. Steve Szabo with Jones Edmunds and Associates designed the facility and said meeting those guidelines and expectations was a challenge, but a fun and exciting one. Probably the most exciting, Szabo said, was incorporating the old glazing and framing from the iconic firing rooms of Kennedy's Launch Control Center.

"It's set at the same orientation and angle as it was in the Launch Control Center, looking out toward Launch Pads A and B," Szabo said.

Crushed crawlerway rocks also will be incorporated in the facility's landscaping.

"It's really a dedication to the astronauts and the launch team," Kline said. "Every shuttle passed through the crawlerway. Every launch has been viewed through those windows. And we just thought it was a shame to waste them."

New energy-efficient windows will be put into the frames to help the building maintain an energy credit of net zero. Rainwater also will be stored in underground tanks and used for irrigation and bathroom facilities. "The building is designed to be 52 percent more efficient than a traditional commercial building. And to do that we looked at very specific lighting fixtures, design strategies, photovoltaic panels," Szabo said. "We left no stone unturned in that process."

NASA's Mick Barth, who recently graduated from South Dakota School of Mines and Technology, says this is his first project and he has no doubt that every project after it will be green.

"Many people in the construction industry have been building the same way for many years and this being my first project right out of college, this is the only way I've known," Barth said. "So, for many years to come, this is what I'll be doing."

Kline agrees that this project is only the beginning for Kennedy and NASA.

"I hope this is just the start," Kline said. "From now on, we'll model this to the bigger buildings. NASA Construction of Facilities has always strived to get everybody the best air, the best light . . . all the best of everything."