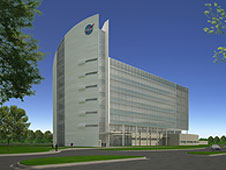 Kennedy Space Center currently is creating a new Master Plan that describes how the center will transform itself from a single user federal entity to one that supports a multitude of users and operations. This agency mandated plan, spans a twenty year horizon and will detail the land uses, business policies and infrastructure that the center will require to remain the launch site of choice for all providers.

Trey Carlson, Master Planner for Kennedy, describes the Future Development Concept with three succinct themes that will guide activity during the next 20 years:

- to adopt new business practices allowing companies and outside organizations to make investments in the center to operate their enterprises,

- to transfer or otherwise dispose of facilities that are not being used enough and won't be needed by future NASA programs,

- to build new facilities that are economically and environmentally sustainable and can be used by a variety of people, organizations and programs.

"It is very challenging making the transition from a government program focused primarily on a single crewed spacecraft to a multiuser program," Carlson said, adding “at the same time, we must be careful not to preclude any future uses with decisions that are being made today.”

Overall, the aim is to keep Kennedy's identity as a premier launch site while adding the capability to host researchers in some fields and adapting the landscape to the needs of a variety of horizontal and vertically launched spaceflight systems and aircraft. After all, Kennedy has some of the most unique infrastructure in the world, ranging from the 3-mile-long Shuttle Landing Facility runway big enough for any aircraft or spacecraft currently envisioned, to the Vehicle Assembly Building, which has stacked the largest rockets NASA has ever flown.

There are about 700 facilities in different areas of the center's 144,000 acres. Figuring out their roles in the center's future was a large part of the master planning effort.

Many structures, including the orbiter processing facilities, have garnered intense interest from organizations and companies outside NASA. Already, one of the three has been leased to Space Florida, which in turn made a deal with The Boeing Company to process its new human spaceflight capsule.

"A multiuser spaceport, by definition, has facilities with different users," Carlson said.

The shuttle runway is already hosting divergent users, including Starfighters Inc. and auto racing teams testing their designs on one of the flattest surfaces on Earth, not to mention transport flights carrying rockets, such as United Launch Alliance’s Atlas V.

While some buildings will be taken down or turned over to new tenants, others will be rebuilt or heavily modified. The north wing of the Operations and Checkout Building is undergoing a remodeling that will eventually remake the facility from the inside. The building, one of the first built at Kennedy, is tapped to host Lockheed Martin's Orion final assembly in the high bay.

Kennedy's Headquarters Building and the Central Instrumentation Facility, which are approaching their 50th birthday and showing signs of their age, are to be taken down the next several years and replaced by a new headquarters that will consolidate all shared services and most administrative functions across the Industrial Area.

The new headquarters building is the cornerstone for the Central Campus consolidation. It will be built in two phases and all shared services and administrative office functions south and west of the current HQ building except for the Occupational Health Facility” (which is scheduled for Phase 4). A third follow-on phase will build a modern engineering and science laboratory building. The new laboratory building will enable a complete gut and renovate project for the South Wing of the Operations and Checkout (O&C) building similar to the current one on the north wing of the O&C. Central Campus will enable demolition of approximately 900,000 square feet of physical plant in the Industrial Area while rebuilding only about 450,000 square feet. Between the 50 percent reduction in foot print and the considerably lower costs associated with the operation and maintenance of the new energy efficient facilities, KSC will save in the order of $400 million during the next 40 years.

"We're going to see a dramatic return on investment with new facilities," Carlson said. Planners have begun discussions with Florida's Department of Transportation exploring partnering arrangements for upkeep and perhaps the eventual improvements of some of Kennedy's roads, particularly the four bridges currently under the center’s care. That could free up NASA's resources for other infrastructure upgrades at the center.

"With a constrained budget forecast we owe it to ourselves to look at options of how to operate the Center in a more sustainable manner," Carlson said."

Although the changes are expected to touch most aspects of the center, Carlson said planners anticipate keeping the area's identity as a NASA launch site and aerospace research hub.

Carlson added, "You will always be driving by a sign at the gate that says, 'Welcome to Kennedy Space Center.' "