Grow Text SizeShrink Text Size
The LRO/LCROSS Flight to the Moon
Plans are under way by NASA centers and educators to spread the word about the upcoming Lunar Reconnaissance Orbiter and the Lunar CRater Observation and Sensing Satellite mission to the moon. 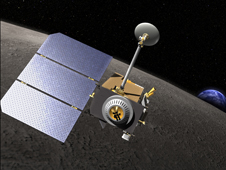 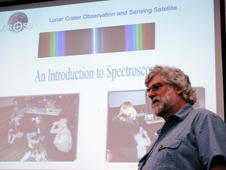 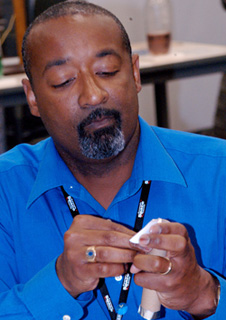 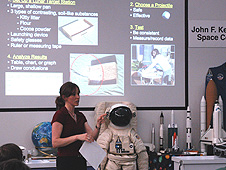 Image above: Rebecca Green, workshop coordinator from NASA Ames Research Center illustrates with a slide show and actual demonstration how common materials can be used to simulate the LCROSS impact on the moon. Photo credit: NASA/Linda Conrad

LRO/LCROSS is the first launch for NASA's new Explorations Systems and the two satellites will be launched together aboard an Atlas V rocket.

The LRO/LCROSS mission hopes to discover what the moon has to offer for the future moon dwellers.

For instance, finding safe landing sites, life sustaining elements, developing new technology and understanding the impact radiation could have on the humans that will someday inhabit the bleak moonscape.

Gregg Buckingham, chief of educational programs at NASA's Kennedy Space Center in Florida, brought together education and communication specialists, outreach coordinators, and public affairs officers to help educate, alert, and inform students and the public about this new and exciting mission.

The spacecraft are not twins, but companions and have a mutual objective according to LCROSS Program Executive, Victoria Friedensen.

"We are the precursor, the pathfinder, the leader. We are the first step in returning to the moon," Friedensen said.

LRO will orbit the lunar poles for up to five years. Just after launch from the Kennedy Space Center, LRO will separate from LCROSS.

Approximately two months after launch LCROSS will impact the moon twice providing key information about the moon's composition and the presence of water ice or hydrated minerals.

The public is already gaining interest in the mission. Names are being collected on the LRO "Send Your Name to the Moon" Web site. Those names will be placed on a microchip that will be implanted onboard the LRO spacecraft.

Throughout the first week alone there was a flurry of activity as over 150,000 names were submitted -- and that number is growing.

One afternoon during the two-day session, the group was treated to a tour of the United Launch Alliance Atlas Spacecraft Operations Building, the Vertical Lift Facility and the launch pad LRO and LCROSS will lift off from.

The group also participated in classroom activities that can be performed with students. These included exercises like cutting and pasting moon sections together by matching lunar facts, building a spectrometer out of cardboard, plastic and tape, and deciding the best place to land on the moon by gathering known information about its surface and properties.

Another demonstration included using a large aluminum pan filled with kitty litter, flour and powdered cocoa to determine how the mass, weight and size of objects catapulted into the pan changed the shape, depth and size of the impact site -- just like it would on the moon.

Projects like these and many others will be brought to students world-wide to spark their interest in science, technology, engineering and mathematics, the building blocks of education for scientists and astrophysicists -- and for learning more about the LRO/LCROSS mission.

In addition, telescopes in many classrooms will give students the opportunity to see the impacts on the moon from the LCROSS probe.

To further support understanding of the space program in the classroom, NASA's Digital Learning Network allows the next generation of explorers to connect with scientists, engineers and researchers almost without having to leave their seats.

Through interactive videoconferencing, the network provides distance-learning events designed to educate through demonstrations and real-time interactions with NASA experts.

NASA's Digital Learning Network will be used during the LRO/LCROSS mission to allow the students access to the progress of the spacecraft through the eyes and ears of scientists and researchers.

"This mission represents a new era, not only for NASA but for the rest of the world," said Friedensen.

› Explore! To the Moon and Beyond
› Educational Activities
Elaine M. Marconi
NASA's John F. Kennedy Space Center
› Back To Top