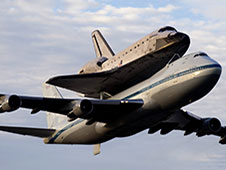 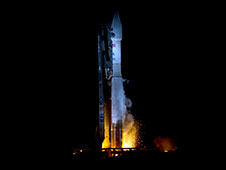 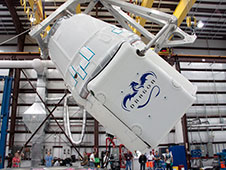 Image above: In a processing facility at Space Launch Complex-40 on Cape Canaveral Air Force Station, the Space Exploration Technologies Dragon capsule is rotated into a horizontal position for mating with the second stage of the company’s Falcon 9 rocket. Known as SpaceX, the launch will be the company's second demonstration test flight for NASA's Commercial Orbital Transportation Services program, or COTS. Photo credit: NASA/Jim Grossmann
› View Larger Image 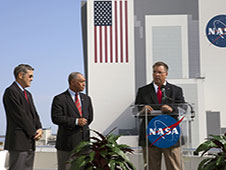 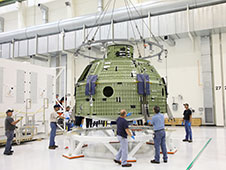 Image above: Technicians use a crane to position the Orion crew module on a workstand in the Operations and Checkout Building high bay at NASA's Kennedy Space Center in Florida. Slated for Exploration Flight Test-1, an unpiloted mission planned for 2014, the capsule will travel farther into space than any human spacecraft has gone in more than 40 years. Photo credit: NASA/Gianni Woods
› View Larger Image 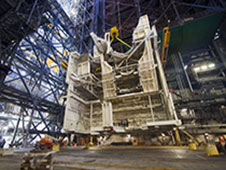 Image above: A large space shuttle-era work platform is being lowered by crane for removal from high bay 3 of the Vehicle Assembly Building. The work is part of a center-wide modernization and refurbishment initiative to accommodate NASA’s Space Launch System and a variety of other spacecraft instead of the whole building supporting one design. Photo credit: NASA/Jim Grossmann
› View Larger Image 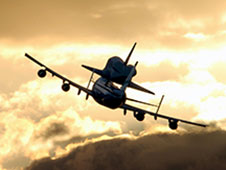 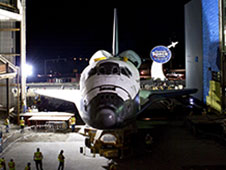 Image above: On Nov. 2, the space shuttle Atlantis is moved into the Kennedy Space Center Visitor Complex facility that will serve as its new home. Photo credit: NASA/Kim Shiflett
› View Larger Image 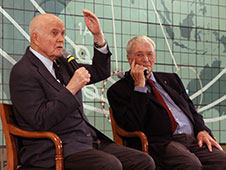 Image above: Mercury astronauts John Glenn, left, and Scott Carpenter sit in front of the plot board from the Mercury control center on display at the Kennedy Space Center Visitor Complex. The astronauts were taking part in a question-and-answer session with the news media as part of events celebrating 50 years of Americans in orbit, an era which began with John Glenn's Mercury Atlas-6 mission on Feb. 20, 1962. Photo credit: NASA/Kim Shiflett
› View Larger Image

In 2012, NASA's Kennedy Space Center celebrated its 50th year and continued transitioning from a historically government-only launch facility to an affordable and sustainable multiuser spaceport of the future.

NASA's Launch Services Program (LSP), based at Kennedy, launched its first mission of the year June 13, more than 7,000 miles from Florida's Space Coast in the Pacific Ocean. NASA's Nuclear Spectroscopic Telescope Array (NuSTAR) began its two-year mission aboard an Orbital Sciences' Pegasus XL rocket launched from the Kwajalein Atoll in the Marshall Islands. Now operating in a low-Earth equatorial orbit, NuSTAR is studying high-energy X-ray light to reveal black holes lurking in our Milky Way galaxy and those hidden in the hearts of faraway galaxies.

Kennedy LSP workers also marched toward three launches planned for 2013, one from Florida and two from California's Vandenberg Air Force Base. Targeted to take off early next year, TDRS-K, beginning the next generation of advanced Tracking and Data Relay Satellites (TDRS), will become the latest piece of NASA’s telemetry and communications network. The Landsat Data Continuity Mission (LDCM) is on track to obtain data and imagery for agriculture purposes, disaster response efforts and ecosystem research. The Interface Region Imaging Spectrograph (IRIS) will then take off to help scientists understand how the solar atmosphere is energized.

Work to open a new frontier in space and invest in the American commercial aerospace industry also began to pay off this year.

The Space Exploration Technologies (SpaceX) Dragon capsule became the first commercial spacecraft to berth to the International Space Station on May 25 after launching three days earlier atop a Falcon 9 rocket from Space Launch Complex 40 at Cape Canaveral Air Force Station. As the company's second demonstration mission for NASA’s Commercial Orbital Transportation Services program, the flight opened the door for regularly transporting critical cargo and research to and from the station.

A few months later, SpaceX transitioned to the Commercial Resupply Services phase, launching its first of 12 contracted resupply missions to the station. Lifting off on Oct. 7, the Dragon spacecraft embarked on a journey to deliver about 1,000 pounds of supplies to the orbiting laboratory. It also carried with it critical materials to support about 170 investigations, some of which stemmed from Kennedy's Engineering and Technology Directorate and the International Space Station Ground Processing and Research Directorate.

These commercial cargo flights provide a glimpse of what commercial crew transportation services to low-Earth orbit might look like in the future. Working with seven commercial partners during the Commercial Crew Development Round 2 phase, NASA's Commercial Crew Program (CCP) continued to move promising spacecraft and launch vehicles concepts forward.

The program then signed new agreements in August with three companies for the Commercial Crew Integrated Capability (CCiCap) initiative. Until mid-2014, CCP will work with SpaceX, Sierra Nevada Corp. (SNC) and The Boeing Company as they complete their integrated spacecraft and launch vehicle designs, test their hardware, and showcase how they would operate and manage missions from launch through orbit and landing.

All three companies have chosen to base their launch operations at Cape Canaveral Air Force Station, which is expected to bring hundreds of high-paying jobs to the area within the next five years. In an effort to cut down on cost, Boeing has decided to build its CST-100 spacecraft close to its United Launch Alliance Atlas V launch site. The company is working with Space Florida to modernize Kennedy's former Orbiter Processing Facility-3, now called the Commercial Crew and Cargo Processing Facility, and plans to occupy the facility in the summer of 2013.

CCP also awarded the first phase of contracts in certification efforts for crewed missions to the space station. The two-phase approach of Certification Products Contracts (CPC), awarded to the same three companies, will run concurrently with CCiCap. The CPC phase will allow NASA and industry to iron out how systems in development could meet all of the agency's safety and performance requirements.

By investing in American-led commercial space transportation systems for low-Earth orbit missions, NASA can focus on exploring farther than ever before with its own rocket and spacecraft.

The agency's first space-bound Orion spacecraft arrived at Kennedy on June 28. It now is being processed and tested for flight in the Operations and Checkout building high bay. The first uncrewed mission of Orion, called Exploration Flight Test-1, is targeted to launch atop a Delta IV rocket in 2014. NASA also is designing a heavy-lift rocket called the Space Launch System (SLS) that will launch future Orion spacecraft and astronauts farther into space than ever before from Kennedy.

To position the center as a premier launch site for both government and commercial spaceflight missions, NASA's Ground Systems Development and Operations (GSDO) Program is developing multipurpose ground systems and upgrading infrastructure and facilities.

This year, the program removed hundreds of miles of cables, replacing it with state-of-the-art command, control and communication systems in the Vehicle Assembly Building (VAB) and at pad 39B. Workers also removed space shuttle-era work platforms from the VAB to make room for a more flexible concept and began to upgrade a legacy crawler-transporter to support the SLS.

While preparing for the future, Kennedy workers closed out a historical chapter in human spaceflight. The team methodically processed space shuttles Discovery, Endeavour and Atlantis for their new missions to educate and inspire America's next generation of explorers at display sites across the country. They also preserved unique shuttle-era hardware that NASA could call on for the future, such as the space shuttle main engines set to be repurposed for use on the SLS.

Shuttle Discovery was the first to depart Kennedy when it took off atop the agency's Shuttle Carrier Aircraft on April 17. The ferry flight to the Washington Dulles International Airport in Virginia took about four hours. The agency's most-flown shuttle then was transported to its new home at the Smithsonian's National Air and Space Museum Steven F. Udvar Hazy-Center in Chantilly, Va.

On Sept. 21, Endeavour made a three-day cross-country trek to Los Angeles with flyovers above NASA's Michoud Assembly Facility near New Orleans and Stennis Space Center in Mississippi, several points around Houston and numerous California landmarks. The agency's youngest shuttle then was honored with a two-day, 12-mile parade as it traveled to the California Science Center.

NASA gave its final shuttle a grand sendoff as it moved Atlantis from the VAB to the Kennedy Space Center Visitor Complex on Nov. 2. Shuttle-era astronauts and members of the workforce who readied the shuttles for 30 years cheered as Atlantis made a final daylong 10-mile trip through Kennedy's Launch Complex 39, Industrial Area and Exploration Park. A fireworks display that night welcomed Atlantis to its new home, which is set to open to the public next summer.

Inside the still-under-construction 90,000-square-foot exhibit hall, Atlantis has been raised 36 feet off the ground and rotated 43.21 degrees. From that angle, visitors will see Atlantis as only its mission crew members have, as if it were in space with its payload bay doors open and robotic arm extended.

Celebrating the many accomplishments of Kennedy and its workforce was a reoccurring theme throughout the year. In February, NASA commemorated the 50-year anniversary of the Mercury-Atlas 6 mission, the successful first attempt at sending an American into orbit. The center then celebrated its own anniversary in July, marking five decades of launching humans and machines into space.

In September, Kennedy hosted its first Innovation Expo to highlight employee innovations and spur collaboration for future center and agency endeavors. Shops, laboratories and facilities offered tours and exhibits across Kennedy and at NASA facilities at Cape Canaveral Air Force Station. Inspirational speakers also came in from outside companies and Kennedy researchers had an opportunity to show off some of their work.

Many organizations across Kennedy collaborated to host a record-turnout year for its high-energy Lunabotics Mining Competition. Thirty-eight U.S. and 17 international college and university teams spent months designing and building their versions of remote-controlled or autonomous excavators, called lunabots, before heading to Kennedy to test them out in a large sandbox filled with lunar regolith simulant.

Another lunar terrain focused project met with success in 2012. NASA’s Regolith and Environment Science and Oxygen and Lunar Volatile Extraction payload was installed on the Canadian Space Agency rover, dubbed Artemis Jr., at Kennedy. The duo and a team of center engineers then traveled to Hilo, Hawaii, where the terrain is similar to the moon's to test how their tools and equipment would drill for resources.

Partnering with commercial customers has been a key focus of the Center Planning and Development Office as Kennedy becomes less program-centric and more capability-centric.

In July, the agency partnered with Craig Technologies of Melbourne, Fla., to maintain an inventory of unique processing and manufacturing equipment for future mission support. Also in July, Kennedy signed a Space Act Agreement with Cella Energy Inc. to base some of its offices in the Space Life Sciences Laboratory. There, Cella is researching the ability to power vehicles with hydrogen adding to the center's sustainability efforts.

As the United States embarks on a new era of spaceflight through government and commercial partnerships, Kennedy will continue to build off its rich history of launching humans and machines farther than imagined and remain the nation's premier launch complex for decades to come.