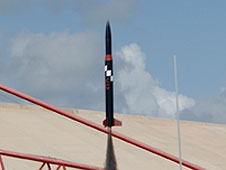 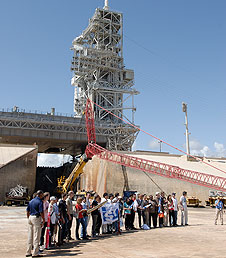 A lawyer from New York took his own giant leap into rocketry as his team won the International Space University's rocket launch competition at NASA's Kennedy Space Center in Florida on Saturday, July 14.

"I never saw myself doing this when I was sitting in the (law) library," said Eric Dawson, an attorney who was one of 134 students from 31 nations taking part in this year's space-focused academics with ISU. "I never saw myself as a rocket scientist, but I guess I am now. I don't think I've taken a science class in seven years."

Six teams designed and built large model rockets, each about three feet tall, and launched them from Launch Pad 39A, the starting point for Apollo missions to the moon and dozens of space shuttle flights. Each launch carried a raw egg, dubbed "eggstronauts" and had to recover it intact to be declared successful.

The fact that an attorney was taking part in an engineering course and competition was not an accident, said Anglie Bukley, dean and vice president for Academic Affairs at ISU, which is based in Strasburg, France.

"We encourage people who aren’t engineers to work in engineering tasks," Bukley said. "Don't do something you're already good at it, this is a chance to expand."

The same holds for other disciplines, as well. The ISU offers in-depth courses on a variety of space-related topics and the faculty encourages students to cross into different fields. For example, engineers who build rockets for a living might learn more taking a class in life sciences.

The ISU holds its summer session in a different part of the world each year. This was the first time the classes have been conducted in Florida, with Kennedy co-hosting the event along with the Florida Institute of Technology, or Florida Tech, in Melbourne.

"To be able to launch our rockets from this historic site is just beyond words," Bukley said.

Ganesh Pillai of India, who worked with Dawson on the Phoenix, said the team designed a rocket to use the most powerful engine available.

"We wanted to go very high," Pillai said. "We've always seen this on TV, the shuttle launch, so being able to be here and launch is an awesome experience."

Fredrik Aarrestad of Norway said his team built its pink rocket, named "My Little Rocket," to show the peaceful uses advanced technology can be employed for. The team included a small, purple stuffed Unicorn in their rocket, the mascot of Unicorn Galactic.

"We have an airborne unicorn!" Aarrestad yelled to the crowd as the rocket lifted off.

Even when launches didn't go well, the students, ranging in age from 21 to 58, took it in stride.

For example, when the Icarus team's craft lifted off like a rocket but landed like a javelin, the four students still bounded into the field happy and excited just to get the chance to launch.

"This is like the greatest day of my life," said Alexander Bartolotti of London. "The issue with rocket science is that you don't want to push the envelope too much because you want it to be reliable. And we were the only ones to use two parachutes and only one of them opened."

Rui Sousa of Portugal, who also worked on the Icarus rocket, said the ISU experience was one-of-a-kind, but they still felt the pressure of deadlines.

"We had to design the whole rocket in just 3 hours because they had to order the parts the next day," he said before the launch. "It's the first time we've built a rocket, so we are just hoping everything goes."

Flying to 669 feet and parachuting back safely with egg intact, the Goldmember rocket was one of the six to win performance accolades.

"Everything went well, it's an amazing feeling," said Anna Szwemin of Poland.

Some real rocket scientists took part in the event, too, including Kelvin Manning, associate director at Kennedy.

"It gets people so enthused about the possibilities of exploration, launching rockets and small scale to making it a bigger scale to send people out beyond low Earth orbit and that's what we're all about," Manning said.