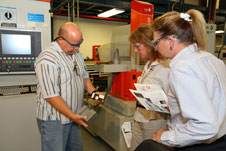 Image above: Duane Dickey, an engineer at the Kennedy Prototype Lab, shows one of the shop's tools and what it can create during a tour of the facility during the Innovation Expo 2012. Photo credit: NASA/Kim Shiflett
›  View Larger Image 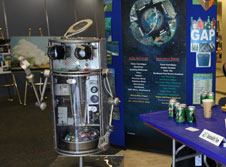 The research and invention taking place at NASA's Kennedy Space Center took the spotlight Sept. 6 as employees showed off some of their ideas and toured the center's unique labs and facilities during the first Innovation Expo.

“I really enjoyed getting around the center on our Innovation Day to see what folks are doing, and allow them to share with me the excitement they have in their projects," said Bob Cabana, director of NASA's Kennedy Space Center in Florida and a former shuttle commander. "Innovation is core to our daily work at KSC, and I think it’s really important that we talk with one another and share ideas. Who knows what we’ll come up with when we collaborate. Hats off to the team that made this day a reality."

Shops, laboratories and facilities offered tours and exhibits across Kennedy and at NASA facilities at Cape Canaveral Air Force Station.

"This is a big center and there are a lot of things that go on here," said Duane Dickey, an engineer showing the machinery and techniques used at Kennedy's Prototype Development Laboratory to make early versions of devices and fixtures that play a role in spaceflight. "So many people don’t know all the things that go on, so I think it's a great idea to let people get out and see and learn what's on the center."

Dickey said the crossover between the departments could encourage communication that might lead to the development of projects.

"I'm sure there are people on center designing and making things that don't know this is here," Dickey said.

That interaction was one of the primary goals for the Innovation Expo, said David Miranda, the lead organizer of the event.

"A lot of times you're constrained by your cubicle wall," Miranda said. "The exhibits and tours are going beyond that and that's really important for innovation because innovation is about taking ideas from somewhere else and applying it somewhere new."

The Innovation Expo was the brainchild of Karen Thompson, chief technologist at Kennedy, Miranda said. It came together in about two months, which is a quick timeline for a center-wide occasion.

Exhibits in the spirit of a world's fair were set up at several buildings at Kennedy and the halls filled quickly with researchers and observers.

"It's great to find out what my cohorts are doing and get crosstalk going," said Walt Turner, who was displaying an experiment in the Operations and Checkout Building related to Alzheimer's research. "Once you find out what other people are doing, it's a short walk to find out how you might help them and how they might help you."

A robot that processed cans for recycling was the star of the display set up by the center's Environmental Management Branch.

Alice Smith, Sustainability and Recycling Program manager, said the event allowed her to show the STAR system, a software tool for tracking and reusing recyclable materials.

There are still people who don't know that Kennedy is focused on recycling materials, said Annie Williams, recycling coordinator, so the Innovation Expo was a natural platform for showing that to people.

Miranda said the expo went well and could become a regular event at the center.

"I think overall it's been good, there've been a lot of lessons learned," Miranda said. "Hopefully (we'll see it) every year."