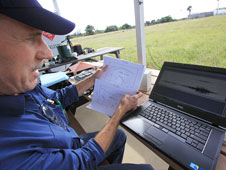 Image above: John Lane looks over data recorded from his laser system as he refines his process and formula to calibrate measurements of raindrops. Photo credit: NASA/Jim Grossmann
› Larger Image

A physicist and researcher who set out to develop a formula to protect Apollo sites on the moon from rocket exhaust may have happened upon a way to improve weather forecasting on Earth.

Working in his backyard during rain showers and storms, John Lane, a physicist at NASA's Kennedy Space Center in Florida, found that the laser and reflector he was developing to track lunar dust also could determine accurately the size of raindrops, something weather radar and other meteorological systems estimate, but don't measure.

The special quantity measured by the laser system is called the "second moment of the size distribution," which results in the average cross-section area of raindrops passing through the laser beam.

"It's not often that you're studying lunar dust and it ends up producing benefits in weather forecasting," said Phil Metzger, a physicist who leads the Granular Mechanics and Regolith Operations Lab, part of the Surface Systems Office at Kennedy.

Lane said the additional piece of information would be useful in filling out the complex computer calculations used to determine the current conditions and forecast the weather.

"We may be able to refine (computer weather) models to make them more accurate," Lane said. "Weather radar data analysis makes assumptions about raindrop size, so I think this could improve the overall drop size distribution estimates."

The breakthrough came because Metzger and Lane were looking for a way to calibrate a laser sensor to pick up the fine particles of blowing lunar dust and soil. It turns out that rain is a good stand-in for flying lunar soil.

"I was pretty skeptical in the beginning that the numbers would come out anywhere close," Lane said. "Anytime you do something new, it's a risk that you're just wasting your time."

The genesis of the research was the need to find out how much damage would be done by robotic landers getting too close to the six places on the moon where Apollo astronauts landed, lived and worked.

NASA fears that dust and soil particles thrown up by the rocket exhaust of a lander will scour and perhaps puncture the metal skin of the lunar module descent stages and experiment hardware left behind by the astronauts from 1969 to 1972.

"It's like sandblasting, if you have something coming down like a rocket engine, and it lifts up this dust, there's not air, so it just keeps going fast," Lane said. "Some of the stuff can actually reach escape velocity and go into orbit."

Such impacts to those materials could ruin their scientific value to researchers on Earth who want to know what happens to man-made materials left on another world for more than 40 years.

"The Apollo sites have value scientifically and from an engineering perspective because they are a record of how these materials on the moon have interacted with the solar system over 40 years," Metzger said. "They are witness plates to the environment."

There also are numerous bags of waste from the astronauts laying up there that biologists want to examine simply to see if living organisms can survive on the moon for almost five decades where there is no air and there is a constant bombardment of cosmic radiation.

"If anybody goes back and sprays stuff on the bags or touches the bags, they ruin the experiment," Metzger said. "It's not just the scientific and engineering value. They believe the Apollo sites are the most important archaeological sites in the human sphere, more important than the pyramids because it's the first place humans stepped off the planet. And from a national point of view, these are symbols of our country and we don't want them to be damaged by wanton ransacking."

Current thinking anticipates placing a laser sensor on the bottom of one of the landers taking part in the Google X-Prize competition. The sensor should be able to pick up the blowing dust and soil and give researchers a clear set of results so they can formulate restrictions for other landers, such as how far away from the Apollo sites new landers can touch down.

As research continues into the laser sensor, Lane expects the work to continue on the weather forecasting side of the equation, too. Lane already presented some of his findings at a meteorological conference and is working on a research paper to detail the work. "This is one of those topics that span a lot of areas of science," Lane said.