Space Shuttle Launch Experience
When the Kennedy Space Center Visitor Complex opens the 44,000-square-foot Shuttle Launch Experience in early 2007, guests won't have to battle silly looking aliens or perform virtual-reality stunts they've seen many times before. Instead, this simulator will take guests on an incredible journey only astronauts have experienced -- launching into orbit aboard a Space Shuttle.

"It's not a thrill ride," said Dan LeBlanc, chief operating officer of the Visitor Complex. "You won't be dodging asteroids or battling any aliens. We have worked hard to ensure that it is as close as you can be to simulating the reality of a Space Shuttle launch within the confines of Earth's gravity." 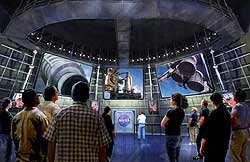 The Shuttle Launch Experience is the first project in a 10-year development plan for the Visitor Complex. Three veteran Shuttle astronauts, including Rick Searfoss, played a key role in designing the simulator and provided feedback to the rest of the design team. The new attraction will be located in the northwest corner of the main complex, where construction has already started. The $60 million project is funded through revenue generated by visitor admission, food and retail sales at no tax payer expense.

"We want people to walk out of this with their mind affected," said Searfoss, who flew three Space Shuttle missions. "This will help tell the NASA story. After they exit the ride, people will hear a presentation of the benefits the Shuttle missions have brought back to Earth."

The journey begins as visitors enter a gantry-styled walkway into a building architecturally inspired by Space Shuttle processing facilities at KSC. Astronaut testimonials then set the stage for what is to come, along with a technical explanation of the steps of a Space Shuttle launch.

Dramatic sound and lighting effects, rumbling floors and fog dramatize the moments before launch. Guests will board the mock-up Space Shuttle and strap in for launch in a unique motion simulator designed to bring the mission alive by replicating the sights, sounds, G-forces and rattle of lift-off. The sensations of launch continue as they experience Max Q, the zone where enormous forces squeeze the Shuttle, Solid Rocket Booster separation, main engine cut-off and the External Tank separation. After this experience, visitors will never view a launch in the same way.

"It's a pleasure to be here for many reasons, but mostly as someone who was born and raised in Central Florida, who grew up on Cocoa Beach, who watched many shots go up in the air," said Jennings. "Florida has earned its reputation as the place for space and if you look at the back of a Florida quarter, you will see it reads, 'Gateway to Discovery.' It wasn't just those Spanish galleons; it was, in fact, those launches right down the road." 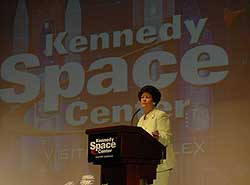 The KSC Visitor Complex's decade-long, $160 million plan will transform it into a place where all of NASA's activities around the world, and throughout the universe, can be experienced. The plan will usher in nine new exhibits, plus new and enhanced visitor amenities to bring exciting NASA projects to life.

New areas will include the Shuttle Launch Experience; NASA Central; NASA's Interplanetary Exploration 4-D Exhibit; Visit to the International Space Station; Origins: A Journey to the Birth of the Universe; Exploration of Our Home Planet; The Moon, Mars and Beyond; Space Shuttle Orbiter Exhibit; and the Merritt Island National Wildlife Refuge Interpretive Facility.

KSC Director Jim Kennedy is proud of the way the Visitor Complex shares the NASA story. "The public loves the Visitor Complex," said Kennedy. "Everything they show is inspired by real NASA initiatives and fueled by the human spirit. Over 1½-million tourists per year pass through the attraction's gates, and everything is paid for by those receipts. That speaks volumes for the public's interest in the space program."