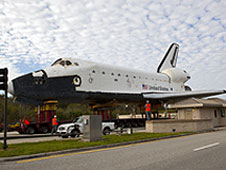 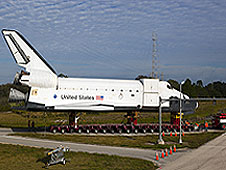 Moving the high fidelity model of the space shuttle Dec. 10 called for an array of planning, about 100 people and a specialized trailer. It also called for the temporary removal of 18 light poles, four traffic signals and some signs.

It took the team about five hours to make the six-mile trip from the Kennedy Space Center Visitor Complex to the Turn Basin across the street from the Vehicle Assembly Building. The group started rolling at 7:30 a.m. so they wouldn't have to worry about the dark.

"It went very well," said Gerald "Jay" Green, project manager for the move. "I felt a great sense of accomplishment when we got it done."

A similar move will be made next year when space shuttle Atlantis is taken the opposite direction to its display location at the Visitor Complex.

The model's convoy never traveled more than about 6 mph. It came to a stop many times along the way so the trailer's built-in jacks could raise or lower the wings to get past obstacles such as guard shacks and traffic lights.

"There were four or five really hard spots," Green said.

But then, moving space shuttles and full-scale model shuttles has always required extra consideration. For instance, crews moving a space shuttle through the mountains in California had to cut slots in the rock to make room for the wings.

Moving the model didn't require such an extreme action, but it took a month of planning and considerable study of potential routes. Even 3-D modeling was incorporated to find problem zones. All this was before Green and his group found out they would have to move it with the wings attached.

The first plans called for the model's wings to be cut off, but that decision was changed, forcing Green to model for a wingspan of 78 feet, not just the relatively narrow fuselage.

"We had to redo the plan in about a week," Green said. "We knew we would eventually have to take Atlantis, so we had to figure out what would make it work."

Some of the workers were on hand in case more signs or other hardware had to be removed as the model made its way.

Beyel Bros., a heavy lifting and hauling contractor, used a specialized trailer that had lifts built in, along with 144 wheels that could turn and swivel so the trailer could move nearly sideways if needed.

The tightest fit came when the wings crossed within six inches of a railroad crossing sign.

The shuttle model took a different route through the center, including going the "wrong way" on an entrance ramp to avoid going beneath the bridge over Kennedy Parkway. With tour buses and other traffic detoured to the other side of the parkway, the model moved north on the southbound side.

The model is expected to remain at the Turn Basin until February, when it will be taken on an open barge to Texas for display at Space Center Houston, the visitor center for NASA's Johnson Space Center.

The model, which weighs some 130,000 pounds, about the same as a real shuttle, is outfitted with doors and people toured the inside of it for years at the Visitor Complex.

"You can go in it, which I think is a great thing," Green said. "It's going somewhere where it's going to be used and enjoyed."