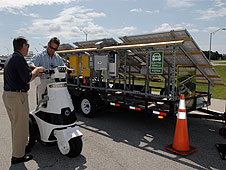 Image above: Manufacturers are learning how to build recharging stations that create electricity from solar cells instead of fuel-consuming turbines or other machinery. An electric-powered scooter from T3 Motion in California stands in front of the generator, but the generators are able to recharge many kinds of electric vehicles. Photo credit: NASA/Kim Shiflett
› View Hi-res Image 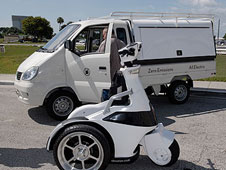 Image above: Electric car manufacturers are turning out many more designs than in the past and their vehicles are also taking on expanded roles. A Miles-brand electric truck like the one in the back could be used as a catering cart, for example. The T3 Motion scooter in the foreground could also take on a number of roles around Kennedy without burning gasoline. Photo credit: NASA/Kim Shiflett
› View Hi-Res Image 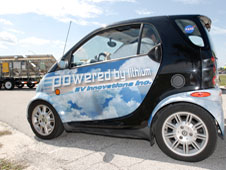 Chesson, who is Kennedy’s coordinator for alternative-fuel vehicles, says he plans to have Kennedy’s entire fleet of 1,686 vehicles running on substances other than gasoline by 2025, hopefully by 2020. That means some electric-powered vehicles, others with hydrogen fuel cells and others that run on 85 percent ethanol. KSC currently operates 104 vehicles on compressed natural gas and manufactures are starting to produce CNG vehicles again.

“There is no silver bullet, so we have to use all the fuels,” he said during a recent seminar about options for electric vehicles and what an infrastructure for charging the cars and carts might look like at Kennedy.

The attraction to alternative fuels comes from their economy and environmental considerations compared to conventional gasoline. From a cost standpoint, an electric vehicle can go 100 miles for $1.97. Electric cars also don’t emit pollutants, and in the case of Kennedy, the solar arrays under construction can eventually provide electricity to the cars cleanly. A fuel cell’s exhaust is only water vapor.

Kennedy is unique among NASA centers because it is so stretched out, covering some 144,000 acres with buildings grouped together in separate zones, such as the Industrial Area, Vehicle Assembly Building section and Launch Complex 39.

Therefore, Chesson did not try to find an electric vehicle that would work for all situations. As corporate representatives at the seminar pointed out, there are limits on speed and distance for the electric vehicles, so there really isn’t a one-size-fits-all option, anyway.

“When I first started looking at it, I thought, it won’t make it because we’re going to have to go from the Industrial Area out to the VAB,” Chesson said. “Then I started though thinking , wait a minute, we’ve got pods we can be in. Out of those three main pods, they work fine within that. If you have to go outside of that, well, we’ve got other vehicles to do that. So we need some vehicles that can do that, but we don’t need all of them to do that.”

Instead, Chesson started picking up low-speed electric carts that can carry workers around the small areas but are not expected to travel between the areas.

For instance, a maintenance team can use an electric cart instead of a gas-powered cart to go from the Operations and Checkout Building to Headquarters.

Since buying the first electric car for the center in 2005, there are now 33 electric vehicles operating at Kennedy.

The options for such vehicles are increasing quickly as more companies get involved in the industry. Miles Electric Vehicles, for example, showed off its electric car that can travel up to 45 miles on a charge.

T3 Motion Inc. brought along its micro-car that operates for 10 cents a day, along with a scooter that security forces could use to patrol small areas or for orbiter wing walkers and safety sniff checks on the runway after orbiter landings.

The fleet conversion is about more than buying new vehicles. It also means building an infrastructure with more fueling options than simply regular or premium. Buildings at Kennedy are expected to be fitted with outlets so the electric cars can be charged, and hydrogen tanks are going to be installed in the Industrial Area and at LC-39 for the fuel cell vehicles.

Helda Rodriguez, president of NovaCharge, says her company expects a million electric cars to be on American roads by 2015, a goal that can only be achieved if consumers are convinced there is an adequate support network for them.

So what does an electric vehicle drive like? Just like an electric golf cart, appropriately enough. For one thing, there’s almost no noise and no sensation of a revving engine. The electric cars are starting to look more like a gas-powered model on the inside, outfitted with seatbelts and radios. Air conditioners are optional, but drain the battery 35 percent quicker.

Few models offer more than two seats, but there are some trucks coming along that have enough power to carry a catering stand, for instance.

Chesson advises people to watch for more such advancements in the next five years as batteries become stronger and power increases, allowing designers to incorporate more features that are standard in the conventional automobile.

“They’re starting to build up, starting to get a little bigger,” he said. “The inventory is growing.”