The Eagles Have Landed
On a crisp morning on the east coast of Florida, an American icon prepares for its maiden voyage. A thin layer of fog stretches lazily between the palmettos, slowly burning away in the morning sun. The tension mounts until the moment approaches. Then, with a sudden burst of movement, the great bird leaps from its launch pad, rising above the treetops and gliding away on the breeze. 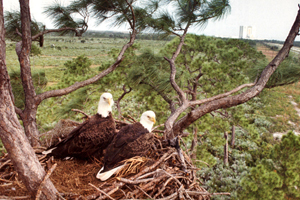 This scene plays out every spring at NASA's Kennedy Space Center in Florida, but it's not a sleek space vehicle that's taking off this morning: It's a fledgling American bald eagle.

Image to left: Two bald eagles are seen here in their nest at NASA's Kennedy Space Center, where they return each year to breed. The landmark Vehicle Assembly Building is visible in the distance at top right. Image credit: NASA/KSC

Kennedy is best known as a gateway to space. Its landscape is dotted with towering launch pads and support facilities filled with high-tech hardware. But the launch complex has a wild side. The space center shares a boundary with the Merritt Island National Wildlife Refuge, established in 1962 and operated by the U.S. Fish and Wildlife Service. The refuge provides a protected habitat for migratory birds and endangered and threatened species.

"Even though it is a very unusual marriage between technology and nature, the marriage has lasted more than 40 years," explains longtime ranger Dorn Whitmore. "And one of the species that really benefits is the bald eagle."

Merritt Island is a stronghold for eagle nests, Whitmore continues. About a dozen pairs of the majestic birds make the refuge their home; some stay year-round, but most migrate north for the summer. Around September, they begin arriving one by one. They can be seen sitting atop high towers, trees or utility poles, keeping a wary eye out for their mates. Eagles maintain bonds with the same mate for life, only taking up with a new mate if the previous one dies or fails to arrive at the breeding ground.

When a couple reunites, they must reclaim their territorial nest, occasionally booting out birds that moved in during their seasonal absence. This can be a battle, and the eagles don't always win. 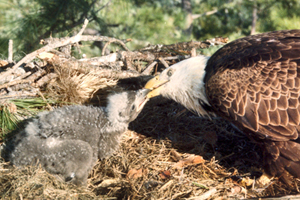 Once the nest is reclaimed or rebuilt in a nearby tree, the birds prepare to expand the family. They add to their nest and line it softly with blades of grass. In late November or early December, the female lays an egg, sometimes two. The downy eaglets hatch around Christmas.

Image to right: A mother eagle gently feeds her eaglet by leaning foward and passing food from her beak to the youngster's mouth. Recently hatched birds must rely heavily on their parents for the first three months. Image credit: NASA/KSC

Like any newborn, a newly hatched eagle is dependent and needy. The youngsters stay in the nest, spending most of their time with their mother, while their father hunts for food -- although mom occasionally takes off to hunt on her own for awhile. It takes about three months for a young bird's "flight feathers" to grow in.

"They'll just jump up on a day with a strong breeze, and hover above the nest in the wind, flapping their wings," Whitmore says. "Then, pretty soon they'll take that first flight, and leap out and take off." 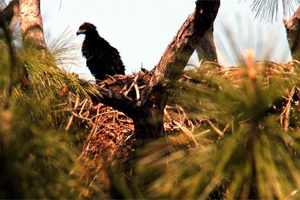 Image to left: Still very young, this eagle waits for one of its parents to deliver the next meal to the nest.
Image credit: NASA/KSC

Around April, the family's time together comes to an end. After caring for each other and their young for several months, the adult eagles leave separately for the journey north. All of the youngsters, still immature and lacking the signature white head and tail feathers of an adult, usually accompany one parent. Whitmore suspects they stay with their mother, learning the best places to live and eat so they'll be prepared to establish their own nests and families when they reach maturity around their third or fourth year.

It will be months before the parents see each other again. But every year in early fall, they'll reunite at the Merritt Island National Wildlife Refuge -- and among the space flight hardware of Kennedy Space Center, they'll launch a new generation of eagles.