Intended as an interim launch vehicle, NASA assigned overall project management to the Goddard Space Flight Center in Maryland, under the guidance of Bill Schindler. 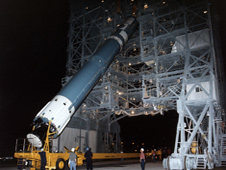 Because a U.S. Air Force/Douglas Aircraft team still was launching Thor and Thor-based missions from Launch Complex-17 at Cape Canaveral Air Force Station, a sharing agreement was worked out with NASA. As might be expected with the merging of two experienced launch teams, there were differences of opinion on how to perform certain tasks, but these were amicably worked out.

Delta 1 was scheduled to launch in early May 1960, but several milestones were missed and some tests had to be repeated. After several false starts, liftoff came at 4:16 a.m. May 13 after a short delay to evaluate the high-altitude wind conditions.

Unfortunately, the second stage attitude control system malfunctioned, and the payload did not achieve orbit. The failure was, of course, a huge disappointment to all concerned, but the NASA/Douglas Aircraft team worked together, found the problem and corrected it.

A second launch, carrying a similar payload, was successful on Aug. 12 at 4:40 a.m. All systems operated properly, and the payload was injected into the desired orbit.

The payload for both Delta 1 and 2 was an inflatable balloon called Echo. The skin of the balloon was fabricated by the G.T. Schjeldahl Co. from mylar with a vacuum-deposited molecular film aluminum. It inflated to a diameter of 100 feet on orbit. Echo acted as a passive communications satellite and was designed to reflect radio signals from one ground station to another.

It orbited Earth at an altitude of 1,000 miles. As a bonus, with its large size, it was illuminated by reflected sunlight and could easily be seen by Earthbound observers.

NASA alum John Neilon was head of the Delta Project Office at Patrick Air Force Base and was the official interface with the Eastern Range. His job was to see that the range met NASA requirements and that, conversely, NASA met their rules and regulations, especially in the areas of safety and scheduling.

During launches and major tests, he was stationed in the apex of the blockhouse of Complex-17. As the test controller, his job was real-time coordination with the range regarding such things as weather and permission to launch.

"I personally recall wasting a lot of time watching it [Echo] go by," Neilon said, "and taking pardonable pride in knowing that I had a part in putting it there for all to see."

In 1970, Gray transferred "across the river" to work on the Apollo Program, and Neilon took his job as director of Unmanned Launch Operations, or ULO. 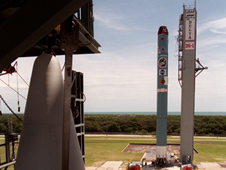 "In my time with Delta, I participated in 119 launches and was launch director for 39," Neilon said.

Throughout the years, the Delta rocket, which started with the capability to put 100 pounds into low Earth orbit, grew and achieved greater capability under McDonnell Douglas, NASA and the Air Force with the addition of such things as strap-on solids for the first stage, increased thrust of the engines and larger payload fairings.

Delta launch capability also was established at Vandenberg Air Force Base in California, giving the Delta rocket the ability to launch payloads into high-inclination orbits without flying over inhabited areas.

Included in that log are some notable missions, including Telstars 1 and 2; Ariel 1, a joint scientific satellite of the United States and the United Kingdom; numerous scientific satellites called Explorers; Deep Space 1; both the Mars Global Surveyor and Pathfinder missions; and most recently, the GOES-P environmental satellite.

Fifty years after the launch of the first interim vehicle, Delta missions still are being launched from Complex-17, as well as Complex-37.

"People always ask what the most important mission was," Neilon said, "The trite, but correct, answer is 'the one you are working on right now.'"

In 2011, NASA has several missions planned for launch on Delta rockets: the Aquarius mission, the first-ever global mapping of salt concentrations in the ocean surface; the National Polar-orbiting Operational Environmental Satellite System Preparatory Project mission, or NPP, to measure Earth's atmospheric and sea surface temperatures, humidity sounding, land and ocean biological activity, and cloud and aerosol properties; and the Gravity Recovery and Interior Laboratory mission, or GRAIL , to determine the structure of the lunar interior from crust to core and to advance understanding of the thermal evolution of the moon.