Combating Corrosion
From a distance, corrosion is not overtly evident at Kennedy Space Center. But closer inspection of launch pad facilities after space shuttle or expendable vehicle launches tells a different story.

According to many published studies of marine environments throughout the country and other parts of the world, Kennedy Space Center has one of the highest corrosion rates. 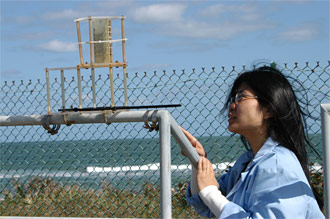 A team of 14 scientists in Kennedy's Corrosion Technology Laboratory is working to reduce the impact of corrosion and even develop new corrosion-prevention technologies. The lab dates back to the Gemini program, with facilities located inside the Operations and Checkout Building, the Launch Equipment Test Facility and at a nearby beach site.

The work is performed inside the electrochemistry lab, general corrosion lab, concrete corrosion lab, coatings application lab, and an accelerated corrosion lab. The beach corrosion facility includes a full weather data area, an atmospheric exposure site with hundreds of samples of coatings exposed to the elements, a seawater immersion site and an on-site laboratory.

Dr. Luz Marina Calle, the corrosion lab's lead scientist, said costs associated with corrosion in the United States are more than $300 billion per year. "At least one-third of this cost could be prevented at the design level," Calle said.

The lab group performs applied research and conducts studies for NASA, the U.S. Department of Defense and various industries. It also interfaces with the NASA Acquisition Pollution Prevention Program when investigating coatings and materials that may be harmful to the center's ecosystem.

The lab also partners to perform corrosion investigations with universities including Florida Tech, Texas A&M University, the University of Florida, and Louisiana Tech, among others.

Dr. Wendy Li, a materials science and engineering graduate from the University of Central Florida, is currently doing her post-doctoral work at the lab. Li is working on a project to develop a "smart coating," a new technology that allows coatings to detect corrosion by changing color and inhibiting further corrosion from occurring.

"Kennedy has wonderful corrosion labs to support the development of this important technology," Li said.

At the beach site facility, remote cameras were installed by Bill Dearing from the Kennedy Space Center Telescience and Internet Systems Lab so that customers can actually view and download data about the corrosion performance of coating samples using the local network and Internet access. "Webcams have proven to be invaluable in monitoring site operations, viewing samples and having access during off-site conferences and presentations," Dearing said. 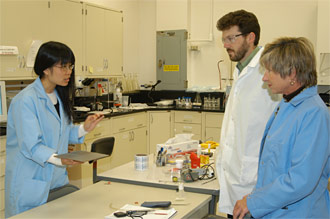 Calle said measurements were conducted in the lab using conditions as close as possible to those of a launch. Weather conditions and exhaust from solid rocket boosters during launches are very damaging to launch pad concrete and coatings. "Exposing various grades of stainless steel and coating samples to real-life weather conditions is one of the main focuses at the beach site," Calle said.

Dr. Paul Hintze, a corrosion scientist, said the lab's corrosion studies will also be instrumental in research for future space missions to the moon and Mars. He said contamination of spacecraft or astronaut environments is an important concern for NASA for scientific and health management reasons "Self-cleaning, anti-microbial coatings that are integrated into spacecraft or crew habitat design would provide an affordable and easy solution to the problem of material degradation in different planetary environments," Hintze said.

"We can slow corrosion down and prevent failures, but it is impossible to eliminate completely," Calle said.

The corrosion lab team emphasizes that the time to think about corrosion is in the design phase.