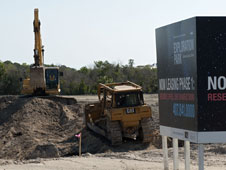 A new approach to an established fuel will be the focus of research, development and maybe production with the help of NASA's Kennedy Space Center in Florida.

Cella Energy's American subsidiary has signed on with Kennedy to make its micro-bead technology practical enough to be used as a fuel in most kinds of machinery, cars and perhaps even spacesuits and portable electronics.

The company, based in Britain, has formulated a way to store hydrogen safely in tiny pellets that still allow the fuel to be burned in an engine. Kennedy, which handles huge amounts of the explosive gas regularly as part of its rocket work, is being enlisted to help the company overcome a couple technological hurdles.

If the work pays off, engines all over the world could run on hydrogen, which burns clean, producing no greenhouse gases.

"We have a lot of great capabilities at Kennedy and some exceptional talent in both our materials and cryogenics labs and I think that's what mostly attracted them to us," said Robert Hubbard, Partnership Development manager at Kennedy.

With hydrogen comes many limitations, largely because it can be very difficult to handle safely.

The pellets, each holding a large amount of hydrogen, could erase that concern, Hubbard said.

"In tests, the hydrogen is stored in its rawest form, encased by the company’s hydrogen storage materials, has proven to be quite stable," Hubbard said.

The eventual goal is to use it in fuel cell engines, which combine hydrogen and oxygen to generate electricity. The only exhaust from fuel cells is water. Again, the technology is something Kennedy is very comfortable with since fuel cells have been used in Apollo spacecraft and space shuttles.

"If the company is able to successfully get this product to market, I think we are going to see a lot of changes within the hydrogen storage and fuel cell industries to utilize more safe and easily adaptable technologies" Hubbard said.

Cella's contract with NASA, called a Space Act Agreement, runs five years and can be extended. The company already has offices in the Space Life Sciences Laboratory at Kennedy and is expected to become an early tenant at Exploration Park, a research center now under construction at the space center.

"In the future, it could turn into a production site within Exploration Park," Hubbard said.

Kennedy's obligation under the agreement is to serve as a consultant to Cella for developing an integrated solution for hydrogen storage and help Cella incorporate Kennedy-developed hydrogen sensing color-changing polymers. Cella also is interested in working with lightweight aerofoam and aeroplastic, another innovation of NASA's, notable for their thermal insulating properties.

The partnership is the latest signal to industry that Kennedy is serious about developing clean energy sources and innovative industries, Hubbard said.

"We're trying to expand Kennedy's portfolio of capabilities," Hubbard said. "We want to be on the cutting edge of developing green energy technologies and what better place to do it than Kennedy’s Exploration Park."