Practice Makes Perfect for STS-116 Crew
With the most complex and energetic mission ahead of them, the seven crew members of upcoming space shuttle mission STS-116 were at NASA's Kennedy Space Center in Florida last week to participate in the Crew Equipment Interface Test. 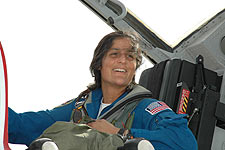 For three days, the astronauts had an opportunity to familiarize themselves with the orbiter controls and its payloads before Discovery's scheduled launch in December.

Discovery was NASA's third space shuttle orbiter to join the fleet in November 1983. After checkout and processing, it was launched on Aug. 30, 1984, for its first mission. Discovery has completed more than 30 successful missions, surpassing the number of flights made by any other orbiter in NASA's fleet.

The shuttle will deliver another truss segment and a SPACEHAB element to the International Space Station. During two spacewalks, astronauts will completely rewire the electrical system that will supply the station with a permanent power-generating source.

Leading the team is Commander Mark Polansky, who previously served as a pilot for Atlantis on mission STS-98 in February 2001. 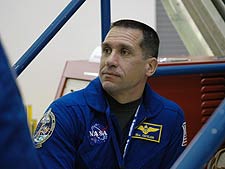 William Oefelein will make his first journey into space as the pilot for the STS-116 mission.

Mission Specialist Robert Curbeam is a veteran of two space shuttle flights. He served as the robotic arm operator on STS-85 in August 1997 and logged more than 19 hours during three spacewalks on STS-98. 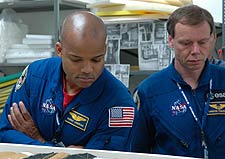 Joan Higginbotham, mission specialist, will operate the station's robotic arm to assist with the construction of the space station.

Image right: Mission Specialists Robert Curbeam and Christer Fuglesang, who is with the European Space Agency, take a look at some of the payload components they'll be working with during the mission. Image credit: NASA/Kim Schiflett
+ View High-res image 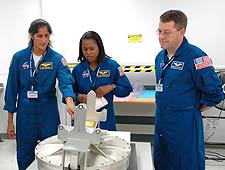 Flight Engineer Sunita Williams will stay on the station with the Expedition 14 team after arriving there on Discovery.

The crew members of STS-116 have been training long and hard for this flight, and their days at Kennedy will keep them keen and sharp for the challenging mission ahead.