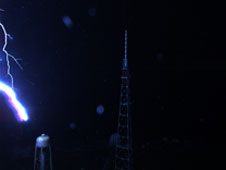 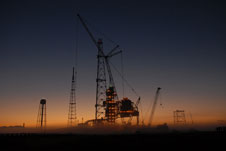 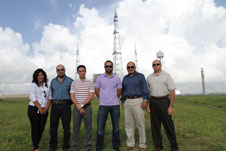 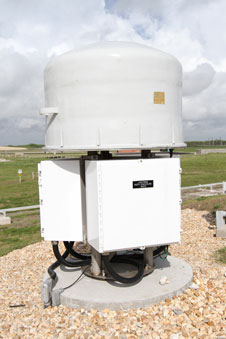 Image above: A B-dot station will work in tandem with down-conductors and D-dot stations to identify whether lightning struck and where, what its strength was and how much disruption it caused. Photo credit: NASA/Cory Huston
› Larger image

Launch pads on Florida's Atlantic Coast face some of the most extreme weather conditions of any launch complex. Everything from lightning and hail to hurricanes and occasional frost make it important to meteorologists to get accurate data to back up their decisions. If they don't, acceptable launch windows could be missed, or worse, unnecessary risks could be taken.

A new comprehensive weather instrumentation system on Launch Pad 39B at Kennedy Space Center is providing up-to-the-second and extremely accurate measurements at different locations and altitudes. The improvements are expected to produce increasingly detailed launch criteria that could lead to more on-time liftoffs for a variety of rockets in the future.

Gary Snyder with NASA and Dr. Carlos Mata with Team QNA were the lead design engineers of the Weather Subsystem, which is composed of two subsystems -- meteorological and lightning. Dr. Frank Merceret, John Madura and Jennifer Wilson with Kennedy's Weather Office provided technical expertise to make sure the meteorological subsystem was well designed to support a variety of launch pad operations in the future. It took about two years to design and install the sophisticated system, which currently is in a final testing phase.

"The team produced a high-quality product that NASA can rely on for collecting accurate meteorological conditions," said Snyder. "Most of all, it includes a truly comprehensive and trustworthy lightning instrumentation system that will collect far more and better quality data than Kennedy or any other space complex has ever accomplished."

The Weather Subsystem begins with a seemingly familiar sight at the space center -- a whole lot of steel. Strategically located around the pad perimeter are three, 500-foot towers that hold up 100-foot fiberglass lightning masts. Between each mast is a host of catenary wires that will shield vital launch hardware from direct lightning strikes.

State-of-the-art sensors installed on four levels of each tower -- starting from the bottom, they are known as levels A, B, C and D -- measure wind speed, wind direction, temperature and relative humidity. Two more meteorological stations to measure rain precipitation and rain accumulation will be installed in the coming months.

"Each tower has the same setup, the idea being that depending on the direction of the wind, we can always rely on at least one tower's worth of measurements," Mata said. "You don't want to be taking wind measurements with the tower in the way."

The stations are even smart enough to operate on their own, which can be beneficial when strong tropical storms or hurricanes impact the Space Coast and most workers evacuate the area. Mata said they can operate on their own for 280 days or so and can send data down to computers in the Pad Terminal Connection Room, or PTCR, a basement-type area below the surface of the pad.

"The meteorological stations are collecting data at one sample per second and when we come back from an evacuation, we'll be able to power up the computers, establish communication and all the data will be downloaded automatically," Mata said.

Even though the data the meteorological system will provide will be highly complex, Mata said the design is actually quite sleek.

The design team worked closely with Kennedy's Weather Office to make sure the system was well designed from an architecture and meteorological standpoint. Structurally and for ease of maintenance, it would have been best to install the weather sensors directly on the towers themselves. Meteorologically, though, they needed to be out a bit so the towers didn't interfere with the data being collected. The solution: installing the components on swing arms.

"This robust system has really upgraded us to a more modern infrastructure," Merceret said. "It will enable us to support all of our NASA customers, including the Launch Services Program, if they develop an expendable launch vehicle to launch off pad B, and future manned spaceflight programs."

The second major component is the lightning instrumentation system. The pad perimeter is equipped with nine down-conductors, as well as four B-dot and five D-dot stations. Simply put, these instruments can identify whether lightning struck and where, what its strength was and how much disruption it caused.

"The lightning system is event-driven and very fast," said Mata. "So, even though we are monitoring at all times, we only record when we detect direct lightning strikes in the immediate vicinity."

In order to operate at such a fast rate of speed, sensors around the pad perimeter are monitored by high-speed transient video and data recorders housed in the PTCR.

"Lightning is a very difficult thing to accurately measure because the phenomena associated with lightning tends to disrupt the instrumentation and corrupt the data that is trying to be captured," Snyder said. "Previous systems have historically produced erroneous data and have failed at the worst times."

Above Level D on the towers, six high-definition cameras, two at the base of each mast, record when triggered to capture high-speed video and give meteorologists and vehicle engineers a complete narrative of lightning events. Those images come in full-color, too, which is far different than the grainy black-and-white images previously available. In late March, the team captured several lightning strikes during severe storms that passed over Kennedy.

Mata explained that the differences in this weather instrumentation system compared to that of a space shuttle launch pad are sophistication, precision and fidelity.

"For the very first time, we're going to have measurements at many different heights and much taller -- 457 feet, 6 inches," Mata said. "We only had two 60-foot weather towers with shuttle, so whenever we were trying to determine winds up above, data had to be extrapolated."

While removing shuttle-specific components from pad B to make it more versatile for future launch systems, construction crews brought down an 80-foot lightning mast and its associated catenary wires from the fixed service structure. During the shuttle program, the legacy lightning instrumentation system triggered warnings and transient recorders if nearby lightning was strong enough, but it still didn't provide the accuracy meteorologists and engineers expect to see with the new system.

Launch controllers will receive one more benefit from this new system during those all-important countdowns -- zero electromagnetic interference, or EMI. This means the sensors are not susceptible to EMI from bird trackings and watercraft radars, which can produce false data. Instead, the system will only track weather events.

Kennedy's Weather Office is working to share this new data with the U.S. Air Force's 45th Weather Squadron at nearby Patrick Air Force Base, which provides weather services and "go" or "no-go" decisions for launches based on weather constraints.

"The fact that we can measure meteorological and lightning parameters right next to a vehicle is of great advantage," Mata said. "We hope to have complete concrete data to know whether flight hardware, payloads or ground control systems were affected by weather events."

"Deploying the Weather Subsystem at pad B in such a short time was a challenge," Perez-Morales said. "The early deployment will provide enough time to collect real weather data and validate the system for use in future programs."