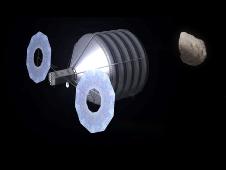 Image above: A notional concept of a solar-electric-powered spacecraft designed to capture an asteroid and relocate it close to Earth so astronauts can explore it. Image credit: NASA
› Larger Image

Kennedy Space Center will have a leading role in NASA's plans to capture an asteroid and launch astronauts to explore it, the center's director told employees shortly before the agency's 2014 budget proposal was released.

"It does everything that needs to be done as far as developing the technologies and the skills that we need for exploration beyond planet Earth," said Bob Cabana, director of the Florida center. "Testing out our spacecraft on a real mission instead of a pure test flight I think is very exciting. The team here at Kennedy, we're ready to get on board and make this happen. I'm very excited about this mission."

The proposal is the first step in the budget process with Congress offering its own suggestions during the next few months. The new fiscal year begins Oct. 1.

The centerpiece of the proposal is NASA's aim to capture an asteroid with a robotic craft and maneuver it into an orbit closer to Earth. Astronauts would launch in an Orion spacecraft aboard a Space Launch System rocket to collect samples and conduct firsthand research on the relocated asteroid.

The mission could take place as soon as 2021, four years in advance of the goal set by President Barack Obama when he visited Kennedy in 2010 and challenged NASA to send astronauts to an asteroid by 2025.

"Everything we're doing leads to making that successful, we have a key role in all of it," Cabana said.

For example, the Orion spacecraft is being readied in the Operations and Checkout Building for a flight test in 2014 to check out the design's fitness.

Modifications for processing, ground support equipment and launch facilities for the Space Launch System rocket, or SLS, are already far along and the proposal includes money to keep making the changes to complete the 21st Century Space Launch Complex concept.

The budget proposal includes about $99 million for continued modifications to the VAB, plus about $14 million for Launch Complex 39B which is deep into its modifications schedule to accommodate the rocket as well as those from commercial companies.

"We continue to make that pad not just to support SLS, but we also want to make it available to support other commercial launch operations," Cabana said.

The Saturn V-class rocket will be stacked atop the mobile launcher inside the VAB. It is to launch from 39B.

The SLS will make it first flight in 2017 with an Orion for a shakedown flight test. Astronauts are slated to fly an Orion for the first time in 2021. That mission could be the one that carries the crew to an asteroid, depending on how the plan progresses.

The Kennedy-based Commercial Crew Program, or CCP will keep working toward a 2017 milestone of its own under this year's budget proposal.

"You can see that the Commercial Crew Program is funded extremely well and that's crucial," Cabana said.

The budget plan calls for $780 million for Kennedy's portion of the program. That amount will allow astronauts to begin flying on privately developed spacecraft and rockets in 2017, said Charles Bolden, NASA administrator.

The Launch Services Program, or LSP, is slated for about $77 million under the proposal. It will oversee several launches in the next fiscal year, starting with the MAVEN spacecraft in November. MAVEN is designed to orbit Mars and find out how and why the Martian atmosphere changed.

"Our Launch Services Program continues to be the backbone for providing our science missions to make NASA successful," Cabana said.

LSP will also be involved with another project NASA included, a landing on Mars in 2020 by a scientific rover which will come on the heels of the success of the Mars Science Lab Curiosity.

The asteroid exploration mission is expected to stretch across three of the agency's directorates and impact planning for a number of areas at Kennedy, Cabana said.