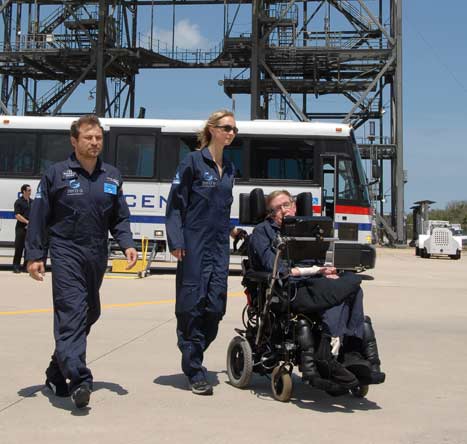 Noted wheelchair-bound physicist Stephen Hawking proceeds to the Zero Gravity Corp. airplane for his first flight in microgravity. Zero-G founder Peter Diamondis, left, and a caregiver joined Hawking on the flight that took off from the same runway the space shuttles land on at Kennedy Space Center. Hawking suffers amyotrophic lateral sclerosis disease which has cost him also all of his neuromuscular control. He said he wanted to make the flight because it is as close as he can come to going into space right now. The flight was made aboard a modified Boeing 727 that flies steep parabollic arcs between 24,000 feet and 32,000 feet, inducing about 25 seconds of free-fall at a time. Photo credit: NASA/Kim Shiflett