Orion's Prototype Heat Shield Undergoes Tests
NASA is teaming up technology developed for the space shuttle and designs used for the Apollo Program to produce elements of the next spacecraft that will deliver astronauts to the moon.

An early sign of that combination has made its way to NASA's Kennedy Space Center, Fla., in the form of a prototype heat shield. The prototype is the same size and dimensions of the heat shield that will protect the Orion spacecraft as it enters Earth's atmosphere on the way back from the International Space Station or the moon. 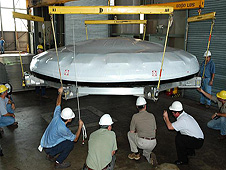 Image above: A developmental heat shield for the Orion spacecraft is being tested and evaluated at Kennedy. The shield was designed for NASA's Constellation Program. Photo credit: NASA/Kim Shiflett

The arrival of the heat shield stirred up excitement from workers on the Constellation Program as they were able to see one of the first pieces of Orion’s full-scale test hardware.

"When [it] got here at the end of November, it was very exciting because it is the first piece of hardware," said Joy Huff, a NASA shuttle orbiter thermal protection system engineer who is spearheading Kennedy's work on the Orion heat shield. "Not flight hardware, but it is flight-type material. And just to see the full size, it really gives you a scale of the size of it."

At five meters in diameter, the heat shield is the largest one of its kind ever built. The prototype was built largely just to prove it could be done, Huff said.

Orion's thermal protection system serves as a barrier against the heat of re-entry to Earth through the atmosphere, Although parts of the heat shield will use shuttle tile materials, the base of it endures the most heat and will burn away, or ablate, as it descends through the atmosphere at more than 25,000 mph.

The use of ablative materials mirrors that of the Apollo Program's approach, in which the entire entry capsule was covered with an ablator, Reuther said. The Orion heat shield also uses techniques perfected for the shuttle’s thermal protection system, particularly the bonding method used to attach the segments of ablative material to the base heat shield. Orion's design is simpler in respect to the number of parts and reusability because the area to be protected is much smaller than that of the shuttle and the base of Orion's heat shield will not be reused.

The prototype heat shield is made of the leading candidate material called PICA, which stands for phenolic impregnated carbon ablator material. The PICA material previously was used for the base heat shield of Stardust, a small robotic spacecraft that successfully completed its mission of obtaining comet samples and returned to Earth in January 2006. 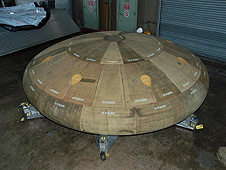 Image above: In Hangar N at NASA's Kennedy Space Center, a prototype heat shield for the Constellation crew exploration vehicle is being prepared for testing. Photo credit: NASA/Kim Shiflett

The blocks on the heat shield share the same delicate characteristics as the shuttle's tiles. Designers also plan to include gap fillers between blocks, just as with the shuttle.

NASA chose an ablative heat shield that slowly burns off because it can handle higher temperatures than the shuttle's reusable tiles. A spacecraft returning from a lunar mission is expected to encounter temperatures as high as 5,000 degrees Fahrenheit during re-entry into Earth’s atmosphere, compared to about 2,300 degrees for a space shuttle re-entry. Because of this, the Orion heat shield can only be used once, Huff said.

The prototype heat shield rests in Hangar N at Cape Canaveral Air Force Station where it will undergo several months of nondestructive evaluation testing that mainly includes laser scans and X-rays. The tests will be used to reveal flaws purposely built into the heat shield.

"We want to get it into the X-ray facility to use X-rays to look for these known flaws," Huff said. "That's part of the nondestructive evaluation testing task to come up with standards, so when you get a flight unit, you know what you’re flying."

But before any testing can be performed, the team at Kennedy has to learn the best way to move and handle the heat shield. Because of the size of the prototype, they also will have to test and develop new handling standards that will be applied to the actual flight heat shields.

"The materials [for the adaptor] have been ordered, [so we] should be fabricating [the prototype] within the next few weeks, get that built and then we’ll put the unit on the adaptor and start nondestructive evaluation testing," Huff said.

She's looking forward to a special milestone to take place by late summer: turning over all handling and testing results to Lockheed Martin.

When that happens, the Constellation Program's mission of putting man on the moon and beyond will be one big step closer.