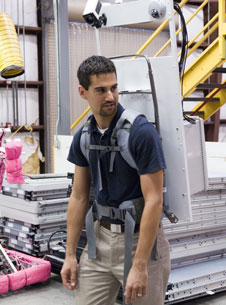 Image above: Mike Miller demonstrates one of the backpacks his team designed and built for the Desert Research and Technology Studies project's upcoming field test in Arizona. Miller led the team that developed the backpacks. The backpacks are equipped with GPS antennas, communications components and cameras. They are meant to show researchers what an astronaut might need to explore an alien world and give designers a look at the hardships the equipment could encounter. Photo credit: NASA/Frank Michaux
› View Hi-res Image 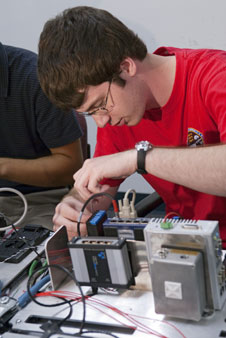 Image above: Isaac Hutson assembles components at NASA's Kennedy Space Center in Florida for one of the backpacks that will be tested during the Desert Research and Technology Studies project's upcoming field test in Arizona. The backpacks are equipped with GPS antennas, communications components and cameras. Photo credit: NASA/Frank Michaux
› View Hi-res Image

Science experiments don't always involve bubbling beakers and people dressed in lab coats and goggles. In the case of NASA's Desert RATS project, an experiment can look like a plastic box bolted to a backpack frame and be carried around the Arizona desert for a month.

Inside the plastic box is a host of off-the-shelf electronics capable of telling the backpacker where he is, letting him talk to distant colleagues and beaming pictures of notable objects to geologists and other scientists.

"The backpack tells you where you are, where you were and it allows you to communicate and share your experience with someone in a different location," said Marc Seibert, a senior research engineer at NASA's Kennedy Space Center. "This backpack has been dreamed about for 10 years."

The backpack is an important part of Kennedy's role in the Desert Research and Technology Studies project, which is set up as a large-scale experiment to find out what equipment and operations scenarios NASA needs to explore the surface of an alien world, such as an asteroid, the moon or Mars.

A team of astronauts, scientists and engineers from several NASA centers head to Arizona's desert each year to simulate the unique environment of space explorers. The effort is meant to test equipment and people to find out the best way to explore another world.

Kennedy's engineers develop the communications, navigation and data transmission networks needed, a task that includes a semitrailer set up as a mission operations center, a command vehicle, a specialized RV, a pair of Humvees plus enough communications gear to set up a wireless network for a small crew of explorers to talk back to "Earth" like they will from other planets.

Equipment from other centers, such as a pair of large rovers, has to work on the same communications network. The rovers, for example, relay the signals from the backpacks to the mission operations center.

Although the area they test in is not a perfect stand-in for the moon or Mars in terms of having breathable air and normal gravity, the site does a pretty good job of isolating the participants, said Mike Miller, communications research engineer at Kennedy.

"We have to take everything to the site, just like we will to other planet surfaces," Miller said.

The research program began 13 years ago, and grows in complexity with each annual run. The 2010 program is focused largely on seeing how effectively astronauts can explore a foreign surface under different communications scenarios and rover modes of operation. It also will put pressure on the scientists to have daily plans ready when the explorers awake each day. That means long nights of studying the day's findings to find out what should be done the next.

"This is probably the highest fidelity lunar simulation that's ever been done," Seibert said.

The backpack carries a pair of cameras, a GPS antenna to pinpoint location and all the electronics needed to store then transmit information. The person wearing the backpack controls its systems using an electronic wrist display, supplied by NASA's Glenn Research Center in Ohio, that is generations ahead of the flip cards Apollo astronauts used during the first trips to the moon. Researchers will also test an iPod Touch from NASA's Johnson Space Center in Houston.

Right now, the backpack and its host of attached gear only has to stand up to the winds and heat of a desert on Earth.

"Environment is a big thing out there," Miller said. "The winds are very high, it gets very hot. We are pretty much out in the middle of nowhere."

Miller said the month-long exercise should show them whether the design works technically and what can be improved.

"Success would be to have all the systems up and working, for the scientists to get the science data and the test team to meet their objectives," Miller said.

Miller and his team were given the backpack assignment only a couple months before the equipment had to be assembled and shipped out.

"We only had two to three months here for everything, the design and building, getting the parts, everything," Miller said as others on his team put the finishing touches on a couple of backpacks.

With the short time frame, Miller said his group worked with Glenn partners and with off-the-shelf equipment to get the job done. The software for the controls was written from scratch to make the gear work with each other and operate to their needs.

"The whole communications infrastructure has been upgraded this year," Miller said.

The biggest challenge, he said, was keeping the weight down since the individual components could not be made from scratch by Miller's team.

Between excursions, the Desert RATS participants catalog what they've learned and look at ways to incorporate changes for the next one, along with passing on changes to other in-depth research programs NASA runs.

The backpack's capabilities are designed with space exploration in mind, but the arrangement may have applications for earthbound explorers, too. Basically, a geologist or other explorer could make a solo trek with the backpack and, on his return, play back the whole trip or selected highlights for those who weren't on the journey.

"Any explorer could use this backpack," Seibert said.