Space Shuttle: Before the Countdown 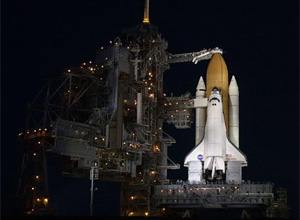 Kennedy Space Center holds the honor of being the world's only Space Shuttle launch site.

Image to left: After rollback of the Rotating Service Structure, Space Shuttle Endeavour is spotlighted against the still-black sky of pre-dawn. Credit: NASA

The Space Shuttle orbiter arrives at Kennedy in one of two ways. It either returns from a mission in space, touching down on the 15,000-foot Shuttle Landing Facility runway, or is ferried on the back of a Boeing 747 from another site, such as Edwards Air Force Base, Calif.

Once on the ground, the orbiter is rolled into one of three bays of the Orbiter Processing Facility (OPF). Here, the process of preparing the Space Shuttle for its next launch begins. The orbiter is raised off of its landing gear and leveled, and an elaborate arrangement of scaffolding and platforms provide access to all parts of the vehicle. 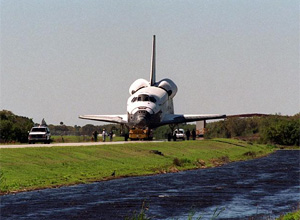 Image to right: Accompanied by workers and Security, Atlantis moves along the tow-way from the KSC Shuttle Landing Facility to the Orbiter Processing Facility. Credit: NASA

During processing, orbiter components are inspected, removed, repaired or replaced as needed. The orbiter's thermal protection system (TPS), certain structural parts, landing gear and other systems are inspected for damage. Any damage to the TPS -- including the roughly 25,000 tiles that cover much of the orbiter's body -- must be repaired before the vehicle launches again.

Routine servicing includes reconfiguring orbiter systems for flight, performing routine maintenance, replacing parts and installing new mission flight kits and payloads. Consumable fluids and gases are loaded aboard, and the final step in OPF orbiter processing is weighing the orbiter to determine its center of gravity.

Finally, all ground support and access equipment is removed, and the orbiter is ready to be mated to the external tank and Solid Rocket Boosters in the cavernous Vehicle Assembly Building (VAB). 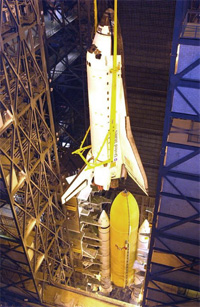 Image to left: After lifting to a vertical position, the orbiter Atlantis is moved toward the solid rocket booster and external tank below for mating before rollout to the launch pad for mission STS-112. Credit: NASA

One of two massive Crawler Transporters moves a Mobile Launcher Platform into the VAB, where crews begin building the two SRBs. They start with the aft skirt (the flared bottom section), then continue with the four main solid rocket propellant segments, and finish with the forward segment and nose cap. Then the huge external tank is lowered into place and connected to the SRBs.

The orbiter is transported to the VAB and bolted to the external tank. Once mated, the Space Shuttle assembly will spend about a week in the VAB undergoing extensive testing. It is then rolled out to one of two launch pads, a trip that takes six to eight hours.

The Shuttle will stay at the pad for at least a month, undergoing final preparations for flight. These activities include putting the payload in the payload bay, loading hypergolic propellants and hosting the crew for a countdown rehearsal. 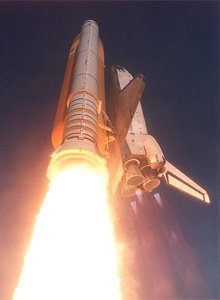 About 18 hours before launch, the Rotating Service Structure -- a mobile portion of the launch pad that protects the vehicle and provides worker access while the Space Shuttle is at the pad -- is rolled away. About nine hours before launch, the external tank is filled with liquid hydrogen and liquid oxygen. The loading process takes almost three hours.

At seven seconds until liftoff, the three main engines are started almost simultaneously. When the countdown clock ticks down to zero, the SRBs ignite: liftoff! During the first moments of ascent, 300,000 gallons of water are used to cool the pad surface and suppress the potentially damaging sound waves generated during launch. Once the Space Shuttle clears the pad surface, all ground control of Space Shuttle systems is taken over by Johnson Space Center in Houston.

After the mission, the orbiter returns to Kennedy and the exciting process begins again.

Image to right: Space Shuttle Atlantis roars into the clear blue sky as it launches on mission STS-110. Credit: NASA