Gateway to the Stars
On the glittering east coast of Central Florida lies an extraordinary expanse of land: NASA's Kennedy Space Center. Along with Cape Canaveral Air Force Station, Kennedy is the launch epicenter for the nation's space program. 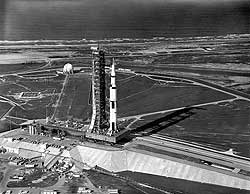 On the shores of the Space Coast, space flight history is being made, dreams are being achieved and imagination is becoming reality.

Image right: This is a May 1969 aerial view of Apollo 11 atop a Saturn V rocket being transported to Launch Pad 39A. Image credit: NASA
+ View High-res image

The Spaceport has played a crucial role in America's reach for the stars, evolving from early rocket launches in the 1950s, through the Apollo moon landing mission and numerous expendable rocket launches during the 60s and 70s.

Employing thousands of contractors and civil servants, Kennedy's role has been preparing and launching space shuttle orbiters for NASA's Space Shuttle Program and integrating, processing and testing the elements for the International Space Station. 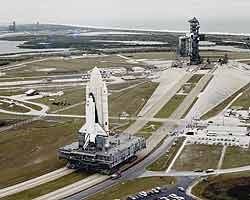 Through NASA's Launch Services Program based at Kennedy, historic missions such as Pluto New Horizons, the Mars Exploration Rovers and important scientific missions have made their way into space from the center's launch pads.

As the space shuttle rounds out its tenure in the annals of history by ferrying the elements to complete the space station, Kennedy Space Center is in the midst of transformation.

There is a bright, new future being planned for Kennedy. The Vision for Space Exploration is running full steam ahead with the center's support of NASA's Constellation Program. 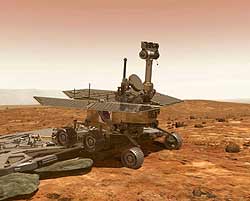 Image right: After bouncing to a stop, the lander's petals unfold and the Mars Exploration Rover drives onto the surface of Mars in this artistic rendering. Image credit: NASA/JPL
+ View High-res image

In order to return mankind to the moon then on to Mars and beyond, a new generation of space vehicles, technology and ground support has to be developed. Lockheed Martin Corp. has been selected by NASA as the primary contractor to design and build Orion, America's next human-rated spacecraft for a new generation of explorers.

Lockheed Martin Corp. will use the center's existing Operations and Checkout Building to assemble and prepare for flight the Orion crew and service modules. This building has an historic background. The facility was used to process the capsules in the 60s and 70s prior to their trips to the lunar surface.

Named for one of the brightest and most recognizable star formations in the sky, Orion will feature an Apollo-type design capable of transporting a six-person crew to the International Space Station in low-Earth orbit and eventually to the moon and beyond. 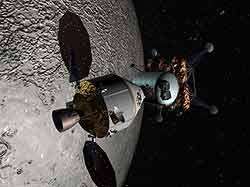 Though Orion looks similar to the Apollo capsule on the outside, the design is totally state-of-the-art from top to bottom.

Orion will be propelled into space by an Ares I rocket which is now in development. The first unmanned test flight of Ares I-1, scheduled for April 2009, will demonstrate control of the vehicle, separation of the first and second stages, and re-entry and parachute dynamics. The initial manned flight is planned for no later than 2014 but perhaps as early as 2012.

Within two years, Ares flight hardware will be delivered to Kennedy. Modifications to existing facilities are currently being planned to support the program.

Firing Room 1, previously used for the shuttle, is being decommissioned and transformed into the launch control center for the Ares I-1 launch and the future launches in NASA's Constellation Program. This control center launched the first space shuttle in 1981, as well as the Apollo 11 and 13 missions to the moon. It is the first to be transferred to the new program for reuse.

This is an ambitious project requiring the skill, expertise and imagination of not only the Kennedy family working together, but the entire agency -- all focused on the future of space exploration.