Grow Text SizeShrink Text Size
The Rockets Behind the Missions 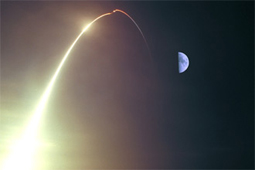 All Expendable Launch Vehicles use the same basic technology to get into space: two or more rocket-powered stages, which are discarded when their engine burns are complete. So how does NASA decide which vehicle to use? That's determined by the payload's weight, orbital destination and purpose. Each launch vehicle has a different set of specialties.

Pegasus
Launched from the underbelly of a converted L-1011 aircraft, the Pegasus vehicle can be launched from almost any location in the world.
› Pegasus Countdown 101
› About the Pegasus

Atlas
NASA relied on Atlas vehicles for several TDRS, GOES and NOAA launches, among others.
› Atlas V Countdown 101
› About the Atlas V

Taurus
NASA's ACRIMSAT spacecraft was boosted into space aboard a Taurus launch vehicle.
› Taurus XL Countdown 101
› About the Taurus