"We've had a long-standing relationship with NOAA," said Andre Dress, the GOES N-P deputy project manager at Goddard Space Flight Center in Greenbelt, Md. "Benefits of developing these satellites in a series for NOAA include design cost savings, continuity and the ability to provide continuous improvements."

Beginning with GOES-A in 1974, NASA has launched close to 20 GOES weather satellites aboard Delta and Atlas rockets. GOES-P is the third in a series of three upgraded weather satellites built by The Boeing Co. in El Segundo, Calif. The others were GOES-N and O, designated 13 and 14 on orbit.

Though not directly involved in the GOES-P launch, NASA's Launch Services Program at Kennedy Space Center has been providing engineering expertise to NOAA for the satellite series since 1997.

"You get the best and brightest from both agencies working together," said Tom Wrublewski, NOAA's technical acquisition manager for the series. "Kennedy's Launch Services Program has helped to ensure the satellites meet NOAA requirements." 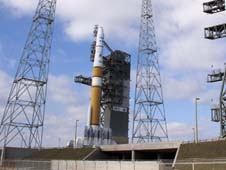 Before older GOES satellites run out of fuel and cease to function, Dress said new and improved ones are launched so that there are always two functional satellites covering Earth's western hemisphere with a third standing by. GOES-13 will be activated in April, and GOES L and M, now called 11 and 12, are still operating. GOES-P, or 15 on orbit, will serve as a backup.

"The satellites orbit 22,000 miles above Earth in geosynchronous orbit, which is the same rate as Earth's orbit," Dress said. "Their primary purpose is to take images of Earth, including infrared pictures, and relay the data to NOAA to give meteorologists the information they need for weather predictions."

GOES satellites have been instrumental in helping to predict severe weather and the path of hurricanes, which is especially valuable for Florida and other coastal states.

The satellites contain a search and rescue transmitter and a data collection system that monitors buoys in oceans, lakes and rivers to relay information about water height, wind speed and temperature.

Dress said NASA and NOAA are always planning for the future. Looking ahead, GOES-R is expected to have a new instrument that takes pictures of Earth five times faster and will see more features in the atmosphere.

"The GOES-R series is in the works now," Dress said. "NOAA brought their engineers to the planning table, making this a true integrated project.