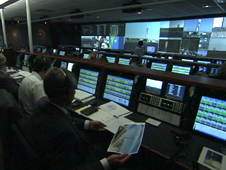 From their consoles in the Mission Director's Center at Cape Canaveral Air Force Station, launch controllers monitor a launch vehicle and spacecraft prior to liftoff. The Telemetry and Communications Group provides data, voice, video and telemetry for NASA launches around the globe -- even as far away as Alaska and the Marshall Islands. Image credit: NASA
› View larger image

The mandate of NASA's Launch Services Program is to be able to launch any vehicle, anytime, from anywhere in the world.

The program lives up to this goal year after year, mission after mission. But the upcoming launch of the Interstellar Boundary Explorer, or IBEX, spacecraft aboard an Orbital Sciences Pegasus rocket will put the program's mobility to the test. That's because IBEX is launching from the Reagan Test Site on Kwajalein Atoll, part of the Marshall Islands in the South Pacific -- thousands of miles away from the program's home base at NASA's Kennedy Space Center in Florida.

Before the launch managers and controllers can sit down at their consoles and put on their headsets on launch day, the Telemetry and Communications Group has to arrange for data, voice and video, and get the consoles set up and configured.

"We have a fully functional mobile system," says Eric Anderson, who leads the group as chief of the program's Ground Systems Integration Branch. Standing in the plush Mission Director's Center at Cape Canaveral Air Force Station's Hangar AE, he gestures at rows of polished wood consoles housing slick computer displays. "We can provide everything you see here on a desk out at Kwajalein. Instead of a comfortable console, you're sitting in front of a laptop computer with extra displays, but the capability is all there."

Anderson's office provides end-to-end support for spacecraft and launch vehicle customers, as well as the program itself, by ensuring all parties have the necessary data, voice and video communications to accomplish all prelaunch and launch-day operations. Examples include transmitting data between the launch site and the spacecraft's mission operations center during prelaunch testing, setting up and configuring controllers' consoles, and recording and displaying vehicle and spacecraft telemetry during liftoff and ascent.

The Telemetry and Communications Group began planning for IBEX in fall of 2007, almost a year in advance of an expected launch in June 2008. Equipment arrived at the South Pacific launch facility in January 2008 and the group successfully completed a full test in March. The system was left in place for the Department of Defense to use for a commercial launch in April. Even though the IBEX launch has been delayed past its original date for various reasons, the hardware at the launch site remains ready to use.

The IBEX launch has introduced a new set of logistical challenges to the team's usual preparations, from arranging for satellite coverage to negotiating an eight-hour time difference.

"We'll have three sites up -- Kwajalein, Vandenberg and Kennedy -- and we'll have them all tied in through satellite," Anderson explains. "It will be the first time three sites are up and running at once for one launch."

Another unique feature of the Launch Services Program's ground system is its ability to process and display data for multiple launch vehicles simultaneously. Although no more than four vehicles are typically monitored at a given time, every console could be set to monitor a different vehicle. Additionally, if the entire system is dedicated to a particular vehicle, it can be reset and dedicated to a different vehicle in as little as half an hour.

The Telemetry and Communications team members rely heavily on their years of experience and their uniquely capable ground system in 2009.

"Next year is going to be exceptionally busy," Anderson says, referring to the number of launches on the schedule, including several from Vandenberg. "It's going to be quite interesting coming up."
Anna C. Heiney
NASA's John F. Kennedy Space Center
› Back To Top