The NASA Environmental Management Branch, in collaboration with Dynamac Corp., the Merritt Island National Wildlife Refuge, and the USDA National Wildlife Research Center, has started a project to improve our understanding of vulture populations at Kennedy. 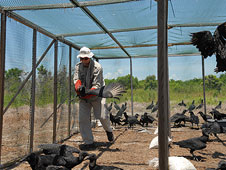 Image above: Eric Stolen secures one of the many vultures his team has captured for tagging. The tags hopefully will allow biologists to study population dynamics and movement patterns during the next five years. Photo credit: NASA/Jim Grossmann
› Larger image 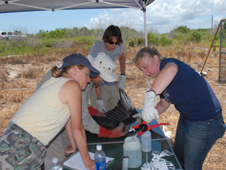 Image above: Team members are tagging vultures with white-wing tags on their right wings. Each tag has a unique three-letter code that will help biologists identify the vultures. Photo credit: NASA/Jim Grossmann
› Larger image

According to Stolen, for years Kennedy has had vulture concerns, such as damage to property or defecation on bleachers and other common areas. Another concern, of course, is that the vultures can get in the way of launches and landings.

"For years there's been a desire to reduce the number of vultures at Kennedy," Stolen said. "But we have no way of knowing how many vultures live here."

So, black vultures and turkey vultures are being fitted with satellite GPS and radio transmitters, which will allow biologists to track their movements, activity patterns and habitat use.

The black vultures roost in large numbers and are considered the bigger nuisance. Turkey vultures fly at low altitudes and are the bigger risk to aircraft.

Stolen says there are two groups of vultures: old world and new world. The old world types include hawks and eagles. The new world vultures are closely related to storks. The ones we have at Kennedy are of the new world variety.

"The neat thing about new world vultures is they have a good sense of smell," Stolen said.

In addition, up to 250 vultures will be tagged with white-wing tags on their right wings, each with a unique three-letter code. These tags will allow biologists to study population dynamics and movement patterns throughout the next three to five years.

Stolen says these efforts will improve our understanding of vulture populations at Kennedy, allowing managers to better assess the risk to flight operations and other mission critical activities, as well as better manage nuisance vulture problems. The wing tags are clearly visible on perched birds and can be read using binoculars.

Kennedy workers are being asked to report all sightings of tagged vultures, including:
1. Tag ID
2. Time
3. Location
4. Number of vultures
5. A brief description of the activity (e.g., roosting, loafing on the ground, feeding at a carcass)
Contact Eric Stolen at: (321) 476-4119
Email: eric.d.stolen@nasa.gov or
Mail: DYN-2
Kennedy Space Center, FL 32899.

Because of the vultures' large population at Kennedy, Stolen reiterates that the vultures are an important part of the environment we share.

"Because there are so many (vultures) in the geographic area they travel in, we are never going to eliminate them from Kennedy, we're going to have to live with them.