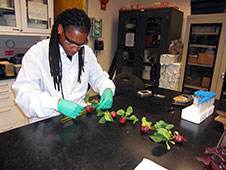 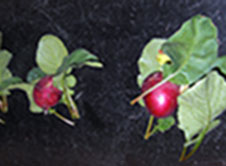 Image above: Radish plants were harvested from a plant growth chamber. The plants were grown under red and blue LED lights. This plant experiment studies the effects of different types of lighting on plants such as radishes and leaf lettuce. Photo Credit: NASA/Frank Ochoa-Gonzales
› View Larger image 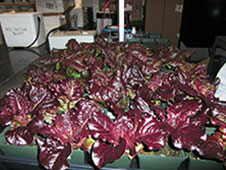 
What kind of food will astronauts eat and what is the best way to grow it during deep space exploration missions? A group of plant biologists is seeking the answers as it works on one of NASA’s Advanced Exploration Systems (AES) Habitation Projects at Kennedy Space Center’s Space Life Sciences Laboratory, one in a series of projects taking place at the agency to forge new approaches to rapidly develop prototype systems, demonstrate key capabilities and validate operational concepts for future human missions beyond Earth orbit.

Gioia Massa, a NASA Postdoctoral Fellow in the Surface Systems group of Kennedy’s Engineering Directorate who works on this AES habitation-related project, said they looked at the responses of a red leaf lettuce called “Outredgeous” and radish plants to different light sources—broad spectrum fluorescent lighting and solid state red and blue LED lighting.

“LED lights are efficient and versatile,” Massa said. “Because of their durability and long life, they are ideal for space missions where resupply of things from Earth is limited.”

According to Dr. Ray Wheeler, lead for advanced life support activities in the Engineering Directorate, using LED lights to grow plants was an idea that originated with NASA as far back as the late 1980s.

Some of the first NASA-funded tests were done at the University of Wisconsin and at Kennedy using wheat and just red LEDs. Wheeler said the wheat plants were very leggy and almost bleached out.

Dr. Matthew Mickens, a graduate of North Carolina Agricultural and Technical State University and recipient of the NASA-sponsored Harriett G. Jenkins Predoctoral Fellowship, followed the plants’ growth during his tenure at the center.

During a recent harvest of the plants, Mickens measured the plants’ shoot length, the shoot diameter, total fresh mass or the weight of the plants at time of harvest, total dry mass of the edible plant matter accumulated during the growth cycle, and the leaf area index.

He used a chlorophyll meter to measure chlorophyll content. Then Mickens flash-froze some of the plants in liquid nitrogen and ground them to a powder in order to perform a new test, an adenosine triphosphate analysis, which measures stored energy in the plant tissue.

“One of the objectives of the study was to understand the effects of green light on plant growth,” Mickens said.

For the test, he compared the growth responses of the lettuce and radishes grown under a treatment of red and blue LEDs, and a treatment of broad spectrum white fluorescent lamps with green light present.

“I discovered that there were considerable physiological differences between the two treatments,” Mickens said.

According to Mickens, results showed darker red color under the red and blue LEDs, which indicates a higher concentration of anthocyanin, a powerful antioxidant that can combat some of the effects of cosmic radiation. Additional replications of the crop cycles are currently ongoing to further confirm these observations.

“Even subtle changes in light quality can potentially increase antioxidant properties of crops such as the lettuce used here,” Mickens said. “The nutritional quality of the vegetables meant to feed our astronaut explorers can be controlled by proper selection of lighting used to grow these crops during long range space missions beyond low Earth orbit.”

There is evidence that supports fresh foods, such as tomatoes, blueberries and red lettuce are a good source of antioxidants, according to Wheeler.

“How they are grown and then consumed in space could have a positive impact on people’s moods and could protect against radiation in closed environments,” Wheeler said.

“As we learn more about different light sources we can better configure the lights to more efficiently product plants that will produce food for the crew, recycle the atmosphere and help to recycle water,” Massa said.

“Ultimately, we would like to develop closed-loop bioregenerative technologies that are self-sustaining,” Massa said. “Our current supplemental food production system is a step towards this future goal.”