Grow Text SizeShrink Text Size
What is the "Range?"
To launch a rocket or a space shuttle from Florida's Space Coast takes teamwork from two distinct federal agencies -- NASA at Kennedy Space Center and the U.S. Air Force at Cape Canaveral Air Force Station. A primary example of that teamwork is the development and operation of the Eastern Range.

A range is an area in and over which rockets are fired for testing and tracking. The Air Force needed a range for over-water flight trajectories, which make long-range missile flights possible over an area relatively free of world shipping lanes and inhabited land masses.

Over the years, the range's name changed several times. It unofficially was called the Florida Missile Test Range in 1952, and officially, the Atlantic Missile Range beginning in May 1958 though NASA's Mercury Program. 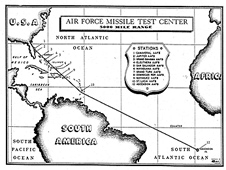 Image above: The Eastern Range, which was unofficially called the Florida Missile Test Range in 1952, as seen above. The range starts at the launch pads at Cape Canaveral Air Force Station and Kennedy Space Center and extends eastward over the Atlantic Ocean and into the Indian Ocean where it meets the Western Range, which is the space launch range that supports launches from Vandenberg Air Force Base in California. Image credit: NASA
› Larger image

On May 15, 1964, the name of the range was changed to the Eastern Test Range, as it was known throughout the Gemini and Apollo programs. Around October 1990, "Test" was dropped from the name, and the range currently is known as the Eastern Range.

By 1961, NASA was using old Air Force and Army launch sites on Cape Canaveral for its Mercury Program. The agency also had three major launch complexes of its own -- 34, 36 and 37 -- under construction on the Cape for the Atlas-Centaur and Saturn programs.

On Aug. 24, 1961, the Webb-Gilpatrick Agreement between NASA and the Department of Defense was signed to establish funding practices on the range.

Though the agreement mentioned a "single manager concept" for operating the range, it also sanctioned the principle of divided ownership in the launch area. Consequently, management of what was known as the Merritt Island Launch Area, or MILA, went to NASA, and the Air Force retained control of Cape Canaveral.

By September 1963, the range extended around the tip of South Africa to the island of Mahe in the Indian Ocean. Many of the range's old missile and space programs either matured or disappeared by the late 1960s.

Refurbishment of Cape Canaveral's launch pads followed in the late 1980s and early 1990s, and there was an ongoing effort to modernize the range with a new Range Operations Control Center, fiber optics communications, radar, telemetry, and consolidated instrumentation facilities at Antigua Air Station and Ascension Auxiliary Air Field.

Today, Cape Canaveral serves as the range's space processing and launch area, and the Air Force controls the range for all eastern-bound launches.

Along with the launch complexes, the Air Force and NASA share other real estate sites, including hangars AF and AE at the Cape.

Today, the Eastern Range extends more than 10,000 miles from the Florida mainland through the South Atlantic and into the Indian Ocean. It includes the launch head at the Cape and a network of instrumentation stations, including Malabar and Jonathan Dickinson tracking annexes and downrange sites at Antigua and Ascension.

Air surveillance to make sure commercial aircraft are clear of restricted areas during launch countdowns, as well as weather forecasts, is coordinated by the Air Force's 45th Space Wing. Waters within the launch safety zone are patrolled jointly by the U.S. Coast Guard and the Air Force -- thus fostering more teamwork across federal agencies.

The Eastern Range, which was unofficially called the Florida Missile Test Range in 1952, as seen above. The range starts at the launch pads at Cape Canaveral Air Force Station and Kennedy Space Center and extends eastward over the Atlantic Ocean and into the Indian Ocean where it meets the Western Range, which is the space launch range that supports launches from Vandenberg Air Force Base in California.