Grow Text SizeShrink Text Size
NASA, International Partners Test Rovers in Hawaii
High above the tropical forests, inviting Pacific waters and sandy beaches, there's a unique site that has many of the same chemical and physical characteristics as extraterrestrial soil.

Called Mauna Kea, it's a remote and cold dormant volcano on the "Big Island" of Hawaii. On the lower slope of Mauna Kea, at a site that resembles a lunar crater, NASA and its international partners are advancing future space exploration.

On Jan. 22, 2010, a joint team from Kennedy and Johnson helped kick off a field test project called in-situ resource utilization, or ISRU for short, on Mauna Kea with support from Hawaii's Pacific International Space Center for Exploration Systems, or PISCES.

"NASA runs tests at sites around the world to simulate the moonscape and other space environments," said Bill Larson, head of NASA's ISRU program at Kennedy. "These 'analog' activities help us evaluate the interactions of multiple systems relating to mobility, infrastructure and effectiveness in harsh climates."

Working with the Canadian Space Agency, or CSA, the German Space Agency, known as DLR, and the University of Hawaii at Hilo, as well as the state of Hawaii, the NASA team is operating 17 resource utilization instruments and systems. 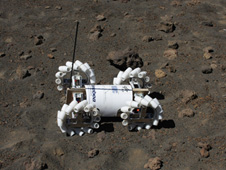 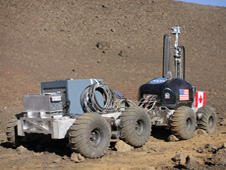 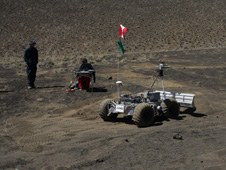 Each one aims to better understand potential space resources, limit the amount of resources humans would have to carry with them beyond low Earth orbit and also protect hardware once is gets there.

"Besides testing the hardware on its own, the field test has allowed NASA to integrate and test hardware with our international partners. The field test would not have been possible without each others' support and equipment. We are each providing critical products and services to the other, just as we would do in an actual mission," said Jerry Sanders, ISRU element lead for the Lunar Surface Systems Office.

Imagine the number of people and the nearly 250,000 cubic yards of concrete it took to construct Kennedy's Shuttle Landing Facility. Now, consider how much it costs to process and launch something off the Earth's surface. Given those variables, the most cost-effective solution wouldn't be to send those resources to Mars to construct a landing site.

Researchers testing hardware on Mauna Kea understand that, so they are using TriDAR images and ground-penetrating radar technologies to create 3-D subsurface models for the selection and construction of a landing pad and access roadways. Meanwhile, a rover with a drill will test subsurface features and three rovers with blades will plow and then level a simulated landing pad.

Even taking along basic necessities would be a challenge because of space limitations in launch vehicles. So, a robotic system called RESOLVE will determine how best to drill and test soil samples for oxygen and water, while another called NORCAT looks for minerals.

One thing researchers know for certain about the moon, is that its soil is made primarily of oxygen. To utilize that natural resource, Canadian engineers developed a Regolith Excavator. On Mauna Kea, the excavator digs and then delivers volcanic material, called tephra, to an Oxygen Extraction Plant that melts and processes the material with methane to produce water.

The water is then electrolyzed, or split, into hydrogen and oxygen. The oxygen is liquefied and stored for later use, and the hydrogen is used to regenerate the methane reactant or stored and used to power other experiments with a Canadian fuel cell.

It would be the same principal on the moon, Larson says the use of this simulated space environment in Hawaii didn't come without a few logistical challenges, though.

First, the team had to enlist the help of the U.S. Air Force Reserve to move the hardware from across the country, over the Pacific Ocean and up to the simulated crater site, about a 5,000-mile trip.

Then, the team had to address some native cultural beliefs. Mauna Kea is considered "sacred" by native Hawaiians. So, the team worked with locals to obtain official access and a blessing of the site by a Hawaiian priest.

In January, Larson's team traveled to Hawaiian schools and the Civil Air Patrol to talk to future explorers about the ongoing work taking place in their home state. They also participated in a Web-based teacher workshop hosted by PISCES on Feb. 8.
Frank Ochoa-Gonzales
NASA's John F. Kennedy Space Center
› Back To Top