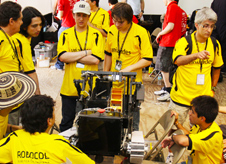 Image above: A team of competitors works with its robot during NASA's Lunabotics Mining Competition at the Kennedy Space Center Visitor Complex on May 25. Photo credit: NASA/Glenn Benson
› Larger image 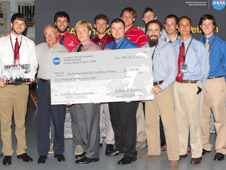 Image above: The team from the University of Alabama took home the Joe Kosmo Award for Excellence for designing and operating the winning robotic vehicle during NASA's Lunabotics Mining Competition on May 26. With the team is Rob Mueller, at left, Kennedy's chief of the Surface Systems Office, and Pat Simpkins, at right, Kennedy's engineering director. Photo credit: NASA/Jim Grossmann
› Larger image

Lunabotics Team NASACAR from the University of Alabama, partnering with Shelton State Community College, both in Tuscaloosa, took the overall grand prize, the Joe Kosmo Award of Excellence, after a week of high-energy competition at NASA's third Lunabotics Mining Competition, May 21-26, at the Kennedy Space Center Visitor Complex in Florida.

"It was a close competition," said team leader and sophomore Adam Melton. "The professional quality and level of every team member helped us to achieve this honor."

For their efforts, the 12-member team of undergraduate and graduate students was awarded a school trophy, a $5,000 team scholarship, Kennedy launch invitations and up to $1,000 in travel expenses for each team member and one faculty advisor to attend one of NASA's remote research and technology tests.

"It's always an awesome pleasure to see how each team accomplishes the task with innovative designs and ideas. You should all be very proud of what you've accomplished over the last few days," Land said.

In all, 55 U.S. and international college and university teams spent months designing and building their versions of remote-controlled or autonomous excavators, called lunabots. Then they descending on Kennedy Space Center en masse to put their lunabots to the test in a large sandbox filled with lunar regolith simulant with a rocky terrain.

The 17 international teams came from Bangladesh, Canada, Colombia, India, Mexico, Romania and South Korea "This competition gets bigger and better each year, with different ideas from people who don't do this every day," said Pat Simpkins, director of Kennedy's Engineering Directorate. "This is testing out concepts for what man is going to use to go beyond Earth orbit and explore."

At the opening ceremony May 23, Kennedy Deputy Center Director Janet Petro welcomed the teams to the competition.

"This competition was designed to engage students in the study of science, technology, engineering and mathematics, or STEM, courses, but it's amazing to think that the innovative concepts from today, from this week, could actually result in ideas and solutions that could be applied to real lunar excavation in the not-too-distant future," Petro said.

She added: "These very 'Lunabots' could be the precursors of the machines that will be carried to the surface of the moon on NASA's heavy-lift vehicle, the Space Launch System."

Building on the previous two year's itinerary, this year's competition had a few twists and turns. According to Lead Technical Expert and Head Judge Rob Mueller, each team had two 10-minute rounds to operate their lunabot to collect and deposit a minimum of 10 kilograms of lunar simulant.

"Scoring for the mining category was not based solely on the amount of material excavated," Mueller said. "We also required the teams to consider various design operation factors such as dust tolerance and projection, communications, vehicle mass, energy or power required and the level of autonomy."

The on-site mining was only a portion of the competition. Each team also competed in other categories to collect points toward the coveted top honors, including writing a systems engineering paper, performing education outreach, creating a slide presentation and demonstration, team spirit, innovation, efficient use of power and use of social media.

Mueller, who is a senior technologist in the Surface Systems Office in Kennedy Engineering Directorate, and one of the originators of the competition, has watched the competition grow from its first year in 2010. He, along with Kennedy Education Specialist Gloria Murphy, created it to help fill a gap between high school and the job market.

"A competition of this caliber gives the students a taste for what it's like to be on a multi-disciplinary team that develops a product to solve a complex problem," Murphy said. "These lunabot entries are helping NASA develop ideas for prototypes for mining on the moon, something that has never been done before."

"In this competition, other countries are right up there with the U.S. and have the spirit, pride and access to the Internet," Mueller said. "We also wanted this competition to be as realistic as possible to lunar missions."

Team member Ricardo Canahui, along with 16 team members and one faculty advisor, said winning will mean everything to the team, the school and their sponsors.

"We finally did it after three years," Canahui said. "We designed this year's lunabot to be lighter, 41 kilograms, which is almost half of last year's 79 kilograms."

Third place winner in the mining competition was Team Regolith Raiders from the Milwaukee School of Engineering. They received a $1,000 team scholarship and launch invitations.

Montana State University in Bozeman was the winner of the Systems Engineering Paper Award and received a $750 team scholarship.

Honorable mentions for Innovative Design went to the University of Alabama, and Florida State University for its Hexcavator, a lunabot that walked on six legs.

Winner of the Social Media award and third place in the Slide Presentation and Demonstration was ROBOCOL from the Universidad de los Andes in Bogota, Colombia.

Santiago Grass Penagos, a senior, was among 23 high-spirited team members and three faculty advisors who traveled to Kennedy for the competition. Their lunabot, Calypso, took a year to design and build.

"We have a lot of team spirit," Penagos said. "We worked on our own time, outside of school, to build our lunabot and received a lot of support from the university and our sponsors."

For Towfiq-ur-Rahmen, a senior at the Islamic University of Technology in Bangladesh, it was his first year in the competition. He, along with three other team members brought their lunabot, called Bangla-Bot, to see how it would perform.

"NASA is the obvious place for engineering," Rahmen said. "We wanted to come to this big competition."