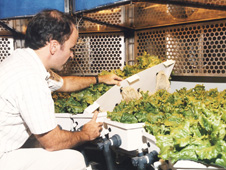 Image above: Dr. Ray Wheeler checks on hydroponically grown lettuce in the Biomass Production Chamber at Hangar L in 1992, prior to the move to the Space Life Sciences Laboratory at Kennedy Space Center. Image credit: NASA
› View Larger Image

"This year's notice was a real surprise and I'm honored to receive the nomination," Wheeler said.

Wheeler will present his lecture during the American Society for Horticultural Science annual meeting July 31 to Aug. 3 in Miami. He will speak to his peers in the industry with a presentation titled "Controlled Environment Research: A Forgotten Discipline with Emerging Opportunities."

Director of Engineering Pat Simpkins said Wheeler's selection for this award is further indication of his excellence in the discipline and Kennedy's unique place in the area of space life sciences and plant physiology.

"He's worked hard to establish this capability in the space industry for Kennedy, and we all applaud this great accomplishment," Simpkins said.

The ARS established the lecture in 1968 to honor the memory of Benjamin Y. Morrison (1891-1966). Morrison was the first director of the U.S.D.A.'s National Arboretum in Washington, D.C., and a pioneer in horticulture.

According to ARS lecture coordinator Kim Kaplan, the lecture award recognizes scientists who have made outstanding contributions to horticulture and other environmental scientists.

"Or for encouraging the use of these sciences for the production of horticultural crops or to preserve and enhance natural beauty of landscape plants," Kaplan said.

"Wheeler also is recognized worldwide for his expertise," Thompson said. "This award is yet another testament to his accomplishments and is truly a high honor."

For his lecture, Wheeler will receive an honorarium, a medallion and a plaque.

Wheeler began his career with NASA at Kennedy in 1988. His work at the Space Life Sciences Lab focuses on lighting and carbon dioxide concentration effects on plant growth and development, and the use of hydroponic techniques for production systems.

Wheeler is the author or co-author of more than 200 scientific papers, and he has presented more than 60 times since 1989. He is the recipient of a NASA Exceptional Scientific Achievement Medal.

Wheeler also serves as a vice chairman for the Life Sciences Commission on the International Committee on Space Research, or COSPAR.

Wheeler said, "During my presentation, I hope to point out the commonalities between using crops for life support systems in space and emerging terrestrial interests in controlled environment agriculture and vertical farming concepts."
Linda Herridge
NASA's John F. Kennedy Space Center
› Back To Top