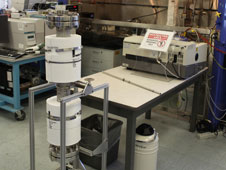 Image above: The prototype reactor researchers have begun working with to refine what is needed for a space-ready trash-to-gas device. Designers will reduce the weight and size of the machine so it can take up as little room as possible in a spacecraft. Image credit: NASA/Dmitri Gerondidakis › View larger image 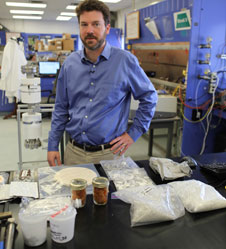 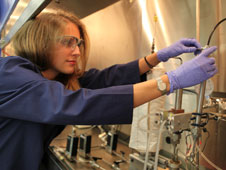 Image above: Anne Caraccio works on an earlier model of the trash-to-gas reactor in a lab at Kennedy. Image credit: NASA/Dmitri Gerondidakis › View Larger image 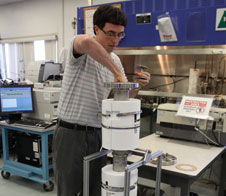 Image above: Stephen Anthony works with the new reactor prototype researchers are using to incinerate trash. Image credit: NASA/Dmitri Gerondidakis › View Larger image NASA researchers focusing on the difficulties of traveling into deep space have identified an unusual source for fuel that astronauts will be carrying with them anyway: trash.

Scientists say there is a good chance that food wrappers, used clothing, scraps, tape, packaging and other garbage accumulated by a crew of four astronauts flying beyond low Earth orbit can be turned into valuable methane gas, oxygen and even water using processes and much smaller versions of devices that are already doing the same thing on Earth.

"We're trying to change the mindset, we don't want to just think of waste as something that occurs, we want to think of waste as a resource," said Paul Hintze, task leader of the trash-to-gas project at NASA's Kennedy Space Center in Florida.

Hintze's group of six researchers at Kennedy and groups from NASA centers in Ohio, California and Texas wrote in a recent paper that the current methods of handling trash – either carrying it along on the round trip through space or gathering it into an expendable module and burning it up in Earth's atmosphere – are not suitable answers for missions that go beyond Earth orbit or even past the moon.

Working in a laboratory at Kennedy, Hintze's team built an 80-pound device that looks like a three-foot-long metal pipe to test theories about incinerating a variety of trash ranging from used clothes to uneaten food. The reactor holds more than three quarts of material and burns at about 1,000 degrees F, about twice the maximum temperature of an average household oven. It's expected to take astronauts four hours to burn a day's worth of trash from a crew of four.

During the course of a year in space – one half the length of time a mission to Mars is expected to take – trash processing for a crew of four would create about 2,200 pounds of methane fuel, enough to power a launch from the lunar surface, Hintze said.

"The longer the mission, the more applicable this technology is," Hintze said. "If you're just doing a two-week mission, you wouldn't want to take along something like this because you wouldn't get anything out of it."

Converting garbage into fuel also would keep astronauts from turning their cramped space capsule into an orbiting landfill.

The research also holds potential for use on Earth in areas of the world where there are neither large power plants nor garbage processing facilities. Using smaller reactors, villages could dispose of their own waste and reap the benefits or an extra source of fuel. The military and other organizations are interested in the project because of the potential to use reactors in remote locations to save on fuel shipping costs.

"Not only will the effort on this help space missions but also on Earth because we have enough problems dealing with our own trash," said Anne Caraccio, a chemical engineer working on the project.

Finding the right materials to handle the pressure of the extreme temperature without melting is the primary engineering hurdle at this point, said Stephen Anthony, a fluids design engineer at Kennedy. The experimental version of the reactor is made of steel, but the team expects to employ a different alloy for future versions.

"The materials that we're using, they lose so much strength that we've had to really oversize the reactor so we have thick walls and large flanges that look fine on a piece of lab equipment but are much tougher to translate into an actual system that can go into a space station or a habitat where size and weight are at a significant premium," Anthony said.

The high temperature is necessary to completely break down materials and destroy potential microbes in the food or other waste. There is also a higher standard for the reactor in space than on Earth because the closed environment in a spacecraft demands that no smell or other potential hazard come into the crew area from the burning process.

"On Earth, a little bit of an odor is not a problem, but in space a bad smell is a deal breaker," Hintze said.

A flight-ready model that can be tried out on the International Space Station could fly as soon as 2018.