"Missed it by three days," Hilderbrand said with a laugh.

The Space Gateway Support security officer has worked at the center for 41 years, with the last 31 years as a guard at Launch Complex 39. That makes him almost as much a fixture as Kennedy's launch pads.

"My main responsibility is to protect lives and protect all assets at Kennedy," Hilderbrand said.

During preparations for Discovery's STS-128 mission, he was stationed mostly at the Launch Pad 39A guard gate.

In 1961, Hilderbrand started as surveyor and inspector for Launch Complex 34 construction at Cape Canaveral Air Force Station, Launch Pads 39A and B, and the Vehicle Assembly Building area, followed by surveyor for the Indian River Bridge.

He joined Kennedy's security force as a patrol officer in 1964, and his duties included traffic enforcement at all posts and gates. He quickly was promoted to sergeant in December 1966, and then became duty officer to supervise the patrol officers. 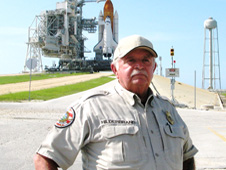 In 1969, while working for Boeing, he had the opportunity to work on the Apollo Program.

"I wanted to broaden my knowledge of the space program and transferred to work on the Apollo 11 launch and landing on the moon," Hilderbrand said.

While with Boeing, he became the fire inspector for all Boeing-occupied facilities at the cape and in Cocoa Beach, Fla. In 1970, he returned to a sergeant position in security.

Hilderbrand took a hiatus from Kennedy in 1973 to manage his own painting/contracting business, but returned to Kennedy in 1980 as a patrol officer. He then tried out for and joined the SWAT team from 1986 to 1991.

During the Cassini Program, Hilderbrand said protesters objected to the plutonium being used for the mission.

"We traveled through swamps and outlying areas, looking for protestors," Hilderbrand said. "At times we would find them and remove them from Kennedy property." Hilderbrand said one of the biggest challenges of his job is the unknown.

"I have to be prepared and ready for the unexpected to happen, any time and any place," he said.

He recalled a time, several years ago, when the driver of a vehicle being chased by police ran his gate on NASA Causeway near U.S. 1 at 100 mph.

"They got the vehicle stopped by shooting the tires and windows out on the vehicle," Hilderbrand said. "You just never know what might happen."

He has seen a lot of wildlife and oftentimes helps the U.S. Fish and Wildlife Service catch alligators near the launch pads and other facilities.

Hilderbrand hopes that NASA's space program will continue on for decades to come and people will enjoy it as much as he has. "Even when the shuttle program comes to an end, I just hope and pray NASA will come up with something to replace it and continue on so there will be a future in space and people living in this area will have jobs," Hilderbrand said.