Sally Ride Remembered as an Inspiration to Others 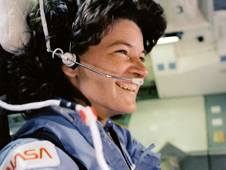 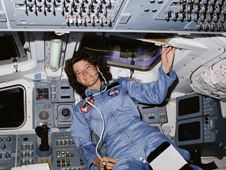 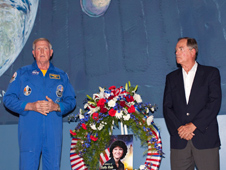 Sally Ride is best known as the first American woman in space. Following her death on July 23, 2012, at the age of 61, she also is being remembered as a soft-spoken physicist who wanted to inspire young people to consider careers in technical fields.

"As the first American woman to travel into space, Sally was a national hero and a powerful role model," President Barack Obama said in a statement released by the White House. "She inspired generations of young girls to reach for the stars and later fought tirelessly to help them get there by advocating for a greater focus on science and math in our schools."

"Sally Ride broke barriers with grace and professionalism – and literally changed the face of America's space program," said Bolden, a fellow shuttle astronaut. "The nation has lost one of its finest leaders, teachers and explorers. She will be missed, but her star will always shine brightly."

Following her career with NASA, in 2001 Ride founded her own company, Sally Ride Science, to pursue her long-time passion of motivating girls and young women to pursue careers in science and math.

"Sally was a personal and professional role model to me and thousands of women around the world," said NASA Deputy Administrator Lori Garver. "Her spirit and determination will continue to be an inspiration for women everywhere."

A Los Angeles native, Ride was an outstanding athlete who was nationally ranked in tennis as a youth. She went on to attend Stanford University where tennis great Billie Jean King saw how well she played and suggested she leave college and become a professional tennis player.

Ride decided to stay in school, earning four degrees including a doctorate in physics in 1978.

One of 35 astronauts selected in 1978, Ride was in the first group of Americans selected for spaceflight that included women and minorities. She and five other women were chosen out of 8,000 applicants. The class dubbed themselves the "Thirty-Five New Guys."

Ride was one of the first four "New Guys" launched into orbit when she was a member of Challenger's STS-7 crew, which lifted off June 18, 1983. She was preceded in space by two Soviet women, Valentina Tereshkova who flew aboard Vostok 6 in 1963 and Svetlana Savitskaya, on Soyuz T-7 in 1982.

"The fact that I was going to be the first American woman to go into space carried huge expectations along with it," Ride recalled in an interview for the 25th anniversary of her flight in 2008. "That was made pretty clear the day that I was told I was selected to a crew. I was taken up to (Johnson Space Center director) Chris Kraft's office. He wanted to have a chat with me and make sure I knew what I was getting into before I went on the crew. I was so dazzled to be on the crew and go into space I remembered very little of what he said."

Indeed there were challenges waiting that Ride's male counterparts did not experience. During one of the news conferences preceding STS-7, she responded to the many questions about being the first American woman to travel in space with humor and grace.

Upon being asked if she wept when frustrated, Ride laughed and said, "Why don’t people ask (STS-7 Pilot) Rick (Hauck) these questions?"

Commenting on her place in history, Ride's focus for that historic event was on the job ahead.

"On launch day, there was so much excitement and so much happening around us in crew quarters, even on the way to the launch pad," Ride said. "I didn't really think about it that much at the time, but I came to appreciate what an honor it was to be selected to be the first (American woman) to go into space."

"The thing that I'll remember most about the flight is that it was fun," said Ride. "In fact, I'm sure it was the most fun I'll ever have in my life."

Ride later served on the Presidential Commission on the Space Shuttle Challenger Accident that investigated the loss of the seven-member STS-51L crew in January 1986. She then accepted a job as a special assistant to the NASA administrator for long-range and strategic planning.

After the loss of the STS-107 crew in 2003, Ride again helped the space agency by serving on the Columbia Accident investigation Board.

"Sally’s life showed us that there are no limits to what we can achieve and I have no doubt that her legacy will endure for years to come," said President Obama.