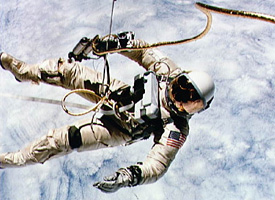 From the early days of Mercury to the lunar adventures of Apollo, from the innovation of the space shuttle to the technological advancements of the International Space Station, NASA has enjoyed several successful human space flight programs for more than four decades. As the nation's only launch site for humans, Kennedy has played a crucial role from the beginning.

A Bridge to the Moon
The Gemini missions paved the way from Mercury to Apollo.
› Read more

The Eagle Has Landed
The successful lunar landings of Apollo captivated the world.
› Read more

A Bold New Partnership
The Apollo-Soyuz Test Project marked the first joint effort between the U.S. and Russia.
› Read more

Working Together for the Future
The Shuttle-Mir Program provided NASA with opportunities, challenges and lessons to learn, in preparation for building the International Space Station.
› Read More