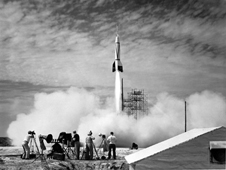 The first launch by the team from Cape Canaveral was of a modified German V-2 on July 24, 1950. The rocket reached an altitude of 10 miles.

After NASA was established, the launch team became the Launch Operations Directorate of the Marshall Space Flight Center. Planning got under way for what was called the Merritt Island Launch Area, or MILA. At that time, what became Launch Complex 39 and Industrial Area were undeveloped and overgrown with reeds and palmettos.

In May of 1961, when President John F. Kennedy challenged America to land men on the moon, the launch facilities and flight hardware needed, existed only in the imaginations of their creators.

In September, NASA asked Congress to authorize the acquisition of a tract of land on Merritt Island to build a moonport. While space center planners drew up the requirements, the U.S. Army Corps of Engineers created a new management office - the Canaveral District - to supervise construction contracts for NASA.

Clearing of the land and dredging for a barge canal and turn basin began in 1962. The independent Launch Operations Center, or LOC, was established on July 1, with Debus as its first director.

The LOC’s name was changed to the John F. Kennedy Space Center by an Executive Order signed by President Lyndon B. Johnson on November 29, 1963, five days after the death of President Kennedy.

The launch pads at Complex 39, designed to support the Saturn V rockets, saw the Apollo Program through to its end in 1972. The Skylab and Apollo Soyuz Test Project missions also lifted off from these pads.

After modifications, these stalwart facilities launched 124 space shuttle missions and will be transformed, once more, to support the Ares rockets for the Constellation Program, re-establishing Kennedy Space Center as the preeminent moonport. Kay Grinter
NASA's John F. Kennedy Space Center
› Back To Top