Grow Text SizeShrink Text Size
Spacesuits Open Doors to MOL History
Bob Crippen wore the uniform of a space shuttle test pilot, shuttle commander, Naval aviator and the suit of a NASA center director. But he never got to wear the pale-blue uniform of an Air Force astronaut riding the Manned Orbiting Laboratory into space. 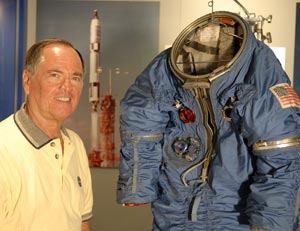 Image right: Astronaut Bob Crippen examines a spacesuit designed for the Air Force's Manned Orbiting Laboratory program. The spacesuit and another just like it were found in 2005 at Complex 5/6. Crippen was selected as a MOL astronaut before the Air Force program was cancelled. He flew on the first space shuttle mission for NASA. Photo credit NASA/Kim Shiflett
+ View hi-res image

No one did, at least not on a space mission. The Manned Orbiting Laboratory, occasionally known as the Manned Orbital Laboratory or MOL, was cancelled six years into the program and three years after its lone unmanned test flight. The termination came June 10, 1969, while the U.S. was still fighting in Vietnam. "I was optimistic (about the program) up to the morning I got the phone call saying it was cancelled," Crippen said. Although the program's aims are highly classified, it is publicly known that the MOL was to be a military space station that would fly 30-day missions. One of the reasons often cited publicly for the project's demise was the advent of unmanned spy satellites. Orbiting platforms filled with high-powered cameras and radars were improving so fast the Air Force decided there was no need to have men in space to tend to them, according to several public accounts. 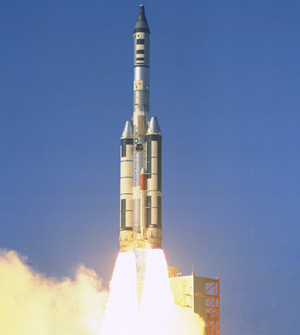 Image left: A Titan IIIC lifts off to test a modified unmanned Gemini capsule as part of the Manned Orbiting Laboratory program. The Nov. 3, 1966, launch included a simulated lab module. It was as close to space as the project would come.
+ View hi-res image

So the work on the Manned Orbiting Laboratory shut down, and the 17 men who made up the Air Force's MOL astronaut corps were out of an assignment, including Crippen and Richard Truly, who went on to become NASA administrator. Like the others in the program, Crippen had been assigned a specialty area of the program to help develop. Some worked on modifying a NASA Gemini capsule to serve as the launch and reentry vehicle, others devised the look of the station. Crippen's job was to help build simulators the astronauts could train in. Richard Lawyer was one of the MOL astronauts assigned to evaluate spacesuits for the program. It was one of his suits that turned up in 2005 in a blockhouse at Complex 5/6 while a pair of NASA agents were inspecting the buildings and came upon a locked door. They discovered Lawyers' MOL suit and another just like it and the detective work began to find out what they were. Crippen found out about the find soon after it was made. "The Air Force ended up with most of the equipment that came off the MOL, so you had to figure it was sitting around some place," he said. 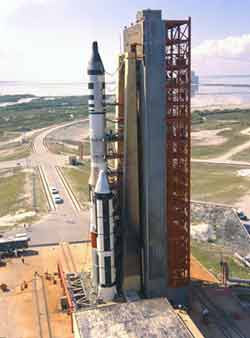 Image right: The Titan IIIC was chosen to lift the first test mission of the Manned Orbiting Laboratory. The modified capsule, known as Gemini-B, was similar to NASA's Gemini sapcecraft, but had a hatch cut in the heat shield and a tunnel.
+ View hi-res image

The suit Crippen looked over during an interview for the Public Television series NOVA will be sent to the Smithsonian Institution's National Air & Space Museum. Another similar to it will be sent to Florida for exhibition at the U.S. Astronaut Hall of Fame, said NASA Program Design Specialist Luis Berrios. The spacesuit discovery became a tangible memory of a project Crippen and others thought would lead to a space mission. He applied for astronaut positions with both NASA and the Air Force and his selection process advanced to the point where he had to pick one path or the other. He chose the Air Force, thinking that NASA already had enough astronauts for its moon flights and that he would have a better chance of flying in space aboard an Air Force craft. "I thought my best opportunity was to fly on MOL," Crippen said. "NASA was going to the moon but it wasn't obvious what they were going to do after that." It was also the time of the Cold War with the Soviet Union, and he liked what the military had in mind for its astronauts. 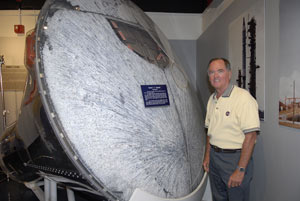 "I did believe there was a role for military people in space and I wanted to be a part of it," Crippen said. He was selected in 1966 as part of the second of three groups eventually chosen for the MOL program. The selection came a few months before the Nov. 3, 1966, launch of a Titan IIIC that lofted an unmanned Gemini capsule and a simulated laboratory module into orbit. The capsule, which is on display at the Air Force Space and Missile Museum at Cape Canaveral Air Force Station in Florida, had flown once before to test NASA's Gemini capsule design. To prepare the capsule for its Air Force duty, technicians cut a hatch through the heat shield. On a manned flight, the astronauts in the capsule would float through a tunnel and the hatch once in orbit to reach the laboratory. The test flight proved, among other things, that the heat shield hatch was safe, that it could still keep the capsule from burning up during re-entry. "The engineering was sound," Crippen said. With that flight behind them, the program's staff and astronauts saw more hardware built for the flights they expected to make. Then it was cancelled. "There were a lot of long faces that day," Crippen said. He explained that several in the group talked about applying to NASA again as astronauts, but it was seen as far-fetched at the time. 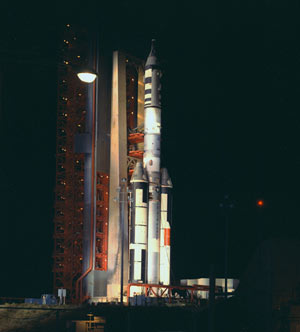 Soon, though, NASA's Deke Slayton, head of the astronaut office and one of the original seven astronauts, agreed to take all the MOL astronauts who were 35 years old or younger. That slate included Crippen and Truly. For Crippen, the move to NASA meant applying some of what he learned about living in space to the designs of the civilian Skylab space station. It also gave the agency an infusion of new expertise. "It produced some of us guys who went on to fly the shuttle and a lot of us MOL guys went on to do some of the design work on the shuttle." The roster of MOL-men included Michael Adams, who earned astronaut wings flying the X-15 rocket plane; Truly, who served as NASA administrator after flying the shuttle; and shuttle astronauts Karol Bobko, Gordon Fullerton, Hank Hartsfield, Don Peterson and Bob Overmyer. Steven Siceloff
NASA's John F. Kennedy Space Center
› Back To Top