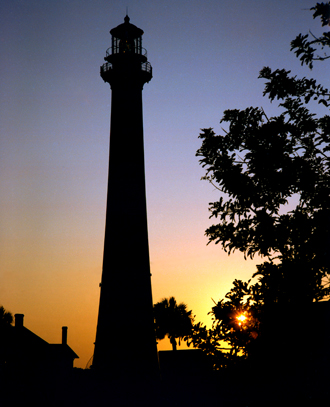 As dawn breaks over the point of land that juts from the eastern coastline of Florida, tall towers are silhouetted against a peach and yellow sky. These mighty metal giants support rockets bound for the vastness of space -- except for one, that is. Standing in the midst of the space-age structures is a monolith born in another era of exploration: the Cape Canaveral Lighthouse.

Image at Right: A beautiful sunrise on the Cape silhouettes the lighthouse and keeper's house against a colorful sky in this 1965 photo. Image credit: NASA

A Point in History
Long before it had a name, Cape Canaveral was an important navigational landmark, appearing on charts since the early 1500s. Later maps show Spanish explorers, including Ponce de Leon, referred to the landmass by several different names. "Cabo de las Corrientes" -- meaning "Cape of the Currents" -- gives a hint of the dangers ships needed to avoid. But it was "Cabo de Canaveral" -- or "Cape of Canes" -- that proved to have staying power.

By any name, the Cape was the recognizable point at which the ships bound for Europe made their eastward turn toward home. 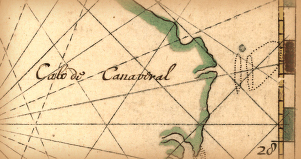 But those dangerous "currents" experienced by the Spanish explorers continued to plague sailors for the next several centuries, leading to a number of shipwrecks off the coast.

Image at Left: This early map from the 1600s shows the Cape as an important navigation point used by Spanish explorers. Dangerous offshore currents caused numerous shipwrecks off the coast in the centuries before a lighthouse was constructed on the Cape. Image credit: Library of Congress

Bringing the Light
In 1848, the first lighthouse was built near the tip of the Cape. Unfortunately, this structure was only about 60 feet high with a rather dim light powered by whale oil. Mariners complained that by the time they were able to see the beacon, their ships were already dangerously close to the shoals they were trying to avoid.

So, in 1859, work began nearby on a new, taller iron structure. But history intervened, halting progress as the Civil War raged. Even the light from the smaller lighthouse was ordered extinguished by the Confederate forces. To comply, the lighthouse keeper dismantled and buried the lanterns in his orange grove until after the war ended.

Finally, the new lighthouse was completed in 1868. The structure, with a brick lining inside its iron exterior, was painted with its "daymark" black and white horizontal bands in 1873 to make it easier to identify during the day as a navigation point. The first three floors, which were laid out as living quarters, were only accessible by an outside stairway that wound up to the third level. 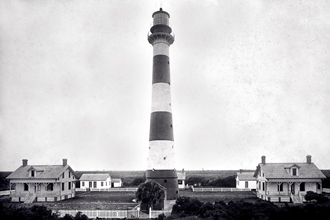 That way, should the sea encroach, the lighthouse could withstand the water without flooding. But it was, in fact, the impending encroachment of the sea that spawned an 18-month relocation project.

Image at Right: This undated historic photo shows the settlement at the lighthouse, including the houses for the keeper and his assistant, and other service buildings. The only building that survives today at the base of the lighthouse is the recently restored oil house where the kerosene for the light was stored. Image credit: NASA

Between 1892 and 1894, the lighthouse was dismantled and moved -- by mule power along specially constructed tracks -- to its new home about a mile and a half further inland. When the reconstruction was complete, it was relit in the location where it still stands today. The keeper's house and other structures, including the oil house which still stands today, were built on the surrounding grounds.

The Light and Those Who Kept It
One man, Captain Mills O. Burnham, and his extended family defined the role of lighthouse keeper at the Cape Canaveral Lighthouse. He tended the light for 33 years and is buried in the family cemetery on the Cape. Several sons-in-law carried on after his death. In Burnham's time, life in the settlement at the foot of the lighthouse was a strange mix of pioneering isolation in a social center.

While difficult to reach from the mainland -- requiring both boat and overland transportation -- for awhile, the Burnham home had the only piano around and area residents would make the difficult journey to attend the Lighthouse Ball.

The light that Burnham kept was the jewel in the new lighthouse's crown. Its new, more powerful beam was state-of-the-art for lighthouses of the time. This 2,000-pound, 12-foot tall gem produced a light that could be seen up to 22 nautical miles.

The beehive-shaped, rotating lens system surrounded the light with a glistening array of glass prisms and bull's-eye lenses. The technology, developed in France by Augustin Fresnel, took the otherwise weak light source and magnified it to reach far out to sea. Though over the years the light source changed, the Fresnel lens sat atop the Canaveral Light for over 100 years, until it was replaced by a modern optic in 1993. Now fully restored, Canaveral's first-order Fresnel lens is on display at the museum of the Ponce de Leon Inlet Lighthouse, about 35 miles north of the Cape.

As time moved on, first the whale oil and then the kerosene that powered the light was replaced by generator-powered electric. Commercial electric power reached the Cape in the 1950s -- an era that also saw automation replace the traditional lighthouse keeper. Today, the modern, automated optic still shines across the waters off the Cape as an aid to navigation.

New Neighbors
The 1950s brought other changes to the Cape, as well. The lonely, isolated lighthouse suddenly had new neighbors -- noisy ones that shook the ground with fiery blasts that sent rockets toward the heavens. 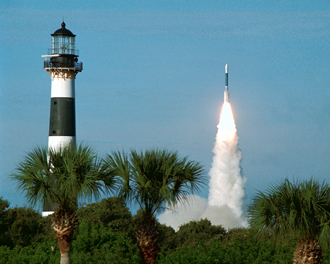 The Space Age had dawned on Cape Canaveral. In fact, it is said that rocketry pioneer Dr. Wernher von Braun actually monitored the early launches from a walkway at the top of the lighthouse.

Image at Right: With the lighthouse in the foreground, a rocket lifts off from one of the many seaside launch pads that dot the shore of the Cape. Image credit: NASA

Seaside launch pads sprung up all along the shore of the Cape as early experimental rockets gave way to manned missions to the moon. Behind the gates of Cape Canaveral Air Force Station, the fully automated lighthouse stood surrounded by workers consumed by exploration of a different sort than those who first came to these shores by ships from other lands.

Restoring the Light
Throughout the 150-year history of the Cape Canaveral Lighthouse, its ownership has been passed like an enduring torch for seafaring men. In 2000, the Coast Guard transferred ownership of the lighthouse structure and its grounds to the U.S. Air Force, which is now responsible for maintaining it. The Coast Guard continues to maintain the beacon as an active navigational aid.

"While the Air Force is paying for the maintenance and some near-term restoration necessary for the lighthouse, it is not able to fund the more expensive restoration that is necessary for the long term," says George Diller, NASA launch commentator who serves as the foundation's treasurer. "So the Cape Canaveral Lighthouse Foundation was formed to help with that."

The only remaining building on the lighthouse grounds, the oil house recently was restored by the Air Force, and the lighthouse itself soon will receive a new coat of paint to repair what time, rust and the hurricanes of 2004 have wrought. 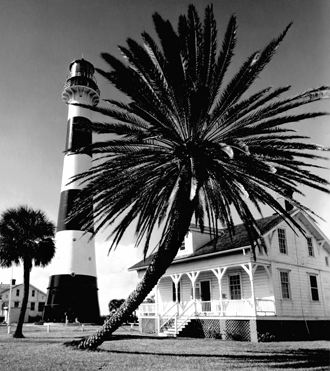 With original architectural plans acquired from the Coast Guard, the foundation now hopes to raise enough funds to aid in the lighthouse restoration and rebuild the other buildings, beginning with the keeper's quarters.

"The goal is to restore this marvelous historic monument so we can preserve it for future generations," says David Paterno, president of the foundation. "When rebuilt, we hope to use the keeper's quarters for a history museum and educational center for our children and grandchildren."

Image at Left: In this photo from 1959, the style and design of the keeper's house can be clearly seen. Plans to reconstruct the house from the original architectural plans are currently under consideration by the Cape Canaveral Lighthouse Foundation. Image credit: NASA

So as rockets continue to soar from the Cape, and new explorers prepare to leave from this point of land headed for the moon, Mars and beyond, each night a strong beacon of light still shines across the waters from the Cape Canaveral Lighthouse.